The folks behind FBAB never get tired of surprising us with their creativity in choosing events. So this time a teaser was given well in advance in the form of a out-of-city eat out, basically a drive+dine event. This got me excited and even more when it was announced that Malgudi Vattika is going to host the 22nd Food Bloggers Association, Bangalore (FBAB) meetup! I keep frequenting Coorg (my home town) and was bored with the usual offerings on this road. Now that i was introduced to this nicely built themed restaurant, I know my breakfast/lunch spot during my next visit!

INTRODUCTION: The place is new, just four months old. The idea behind conceptualising this theme which captures the essence of good old days of the famous TV Serial (Malgudi days) is simply awesome! The moment you step in, it has those soothing vibes which make you go back to 80’s. The serial was all about simplicity associated with a common man and so is this restaurant, a humble establishment would a better description! I would say, go visit it for the experience, but at the same time good food is like added bonus. Highlight- It opens at 6.30 AM!! 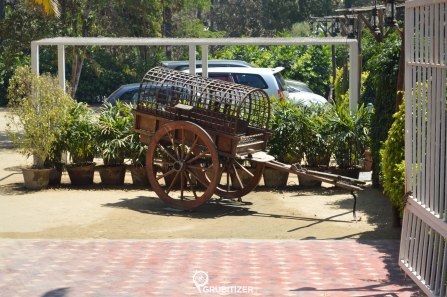 LOCATION: When travelling from Bangalore to Mysore, this place is located 18 kms from Kengeri Satellite bus stop. You will have to keep to your left once you cross Wonder-la and the boards of Malgudi Vattika will greet you in no time.

AMBIANCE: One of the classiest that I have come across. The first thing I noticed was the lamp-posts, a lot of them actually, carefully covering the entire outline of the place. We were told that they are switched on at night. I am sure it would be a sight to look at. Then there is huge lawn covered with lush green grass accompanied by some carefully chosen furniture, a cycle along and a full sized bullock cart!

Lot of seating options, I personally liked the tables outside. There is a separate open air section which is usually meant for small parties and functions. The interiors are spread with range of artefacts which includes an old trunk which actually has the original 60s newspaper stuck on to it. 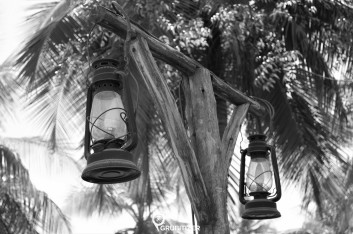 The place has got all sorts of games which has mythological significance. Sadly I could recognise only snake and ladders 😦 I will let pictures do the talking. 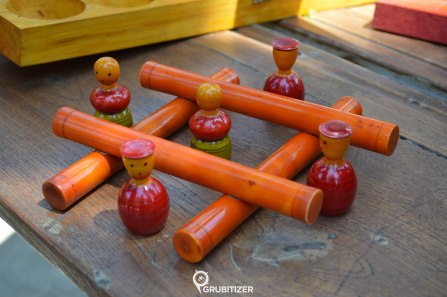 BEVERAGES: Our welcome drink was lime soda. It was done well with not so exorbitant proportions of salt and sugar, i would say perfect! Next in line was the butter milk which is something I usually don’t prefer having. My fellow foodies commented saying it needs improvement with respect to the amount of salt and spices in it. At the end of our meal we were served with fresh fruit juices and I got to taste Watermelon, Pineapple and Chikoo. The amount of sweetness was a tad too much in watermelon. I would prefer sugarless ones any day to savour the original taste of freshly cut fruits.

FOOD: The most exciting part has finally arrived (at least for me :P). South and North Karnataka cuisine along with the trademark dish ‘Makai ki roti and sarso da saag’ was served.Starters consisted of obbattu, Chilli Bajji and Paneer Tikka. Bajji was served pipping hot making it extremely desirable. Obbattu was mildly sweet and had ghee toppings on it, had very less sweetness factor due to usage of Jaggery instead of sugar. Paneer tikka has some scope for improvement, spices in it were good but a little more time for Paneer to soak the marinade would have made the dish stand out. Nonetheless the green mint chutney covered up for it. 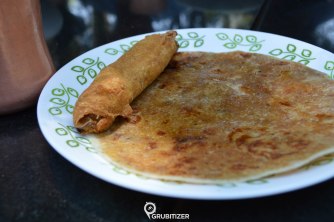 South Indian meals came in and it was huge, the plates were super heavy!!! There were lot of things in it in tiny bowls, basically all that one expects from a wholesome meal. We tried the same thali with different combinations- Rice, Puri and Jolada Roti. I liked the way Jolada roti was made, not many places in Bangalore one gets to savour it. Rice and rasam is something which cant go wrong in any way, it was the same here. Puri with brinjal curry sounds like an awkward combination, but my experiment turned out pretty well! 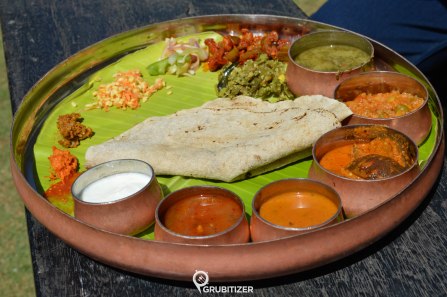 Next we had veg handi biriyani and veg pulao which were more on the sweeter side (North Indian style). They looked similar and the only distinguishing factor was the presence of Paneer in one of them! 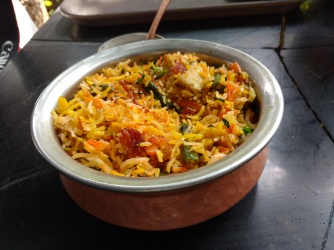 Finally the items I was waiting for- ‘Makkai ki roti an sarson da saag’. This was excuted so well, butter laden makkai ki roti had those subtle corn flavour. It was thick, but thats how it is supposed to be. Sarson ka saag was top notch, I would say a must have when you visit this place.

SERVICE: We were a big bunch of foodies and had our own orders/customizations, it did take a toll on the staff but I feel they executed it pretty well. The orders were recorded and served correctly. A slighlt delay between the dishes, which can be justified by the fact that it was weekend brunch time. The owner of this place spent a lot of time giving us insights about the concept of this place, a very humble person. I totally appreciate the efforts taken to give us all a token of gratitude in the form of miniature ceramic pots which contained chocolates.

FINAL VERDICT: This place is a winner.. Prices are very pocket friendly so it wont burn a hole in your pockets. Malgudi Vattika can easily be chosen as a weekend getaway for brunch or for a romantic dinner away from the city, along with the sole purpose of its existance- serve authentic and healthy meals to travllers who frequent this busy highway. Loved the theme chosen and the nostalgic factor that comes with it.