Hunan is a four time award winning restaurant in the category of Best Chinese Restaurant conducted by Times Food Awards, this fact in itself was a major pushing force which convinced me to attend a bloggers table in their Koramangala outlet on an extremely rainy day. Well the other factor was that even though I have heard a lot about this amazing place and it is super close to my house, I never got a chance to visit Hunan before!! This post talks about their on going food festival called – The Soup and Dim Sum festival, a one of a kind food festival offering gourmet delights particularly created for the monsoon season.

We all enjoy a cup of hot soup on a rainy day, now pair that with some pipping hot dim sums beside it and you are set for the day! Well this is exactly how I feel during rainy seasons when you eat something that compliments the weather outside. The other combination which gives me goosebumps on a rainy day is a cup of hot Chai along with a plate of pakoras 😛 But yes, that’s something which is totally uncalled for in this post so I am going to stick to the Soup and Dim sums that made their way to our table during this dinner meet.

LOCATION:
Hunan is located in the heart of Koramangala (w.r.t food!!) which is the 5th Block, a place bustling with crowd almost at all times of the day. The place is filled with countless eateries in the vicinity but nothing comes close to Hunan when it is about Chinese food. Basically Hunan is housed in the 1st floor of the building which is opposite Black Pearl / Chai point. They have space for car and bike parking in the basement which is a life saver in this street. 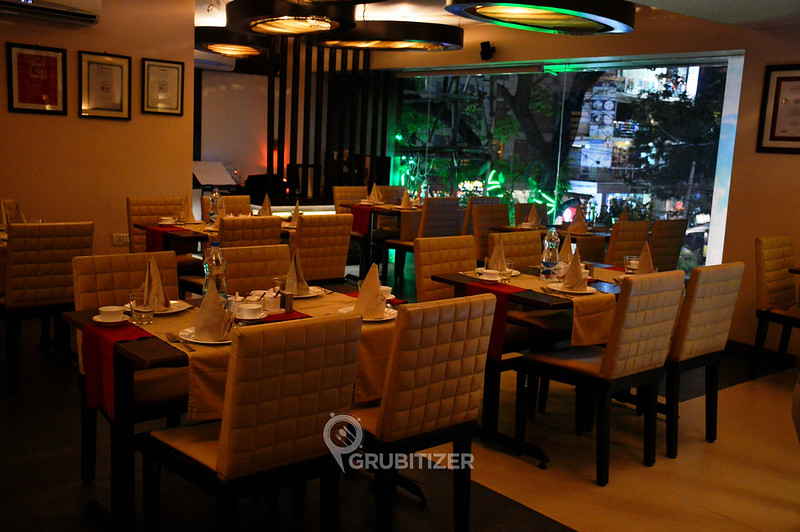 AMBIENCE: Very premium and upmarket is what can easily describe the interiors of Hunan. The place is well isolated from outside clutter and makes you feel cosy under those dimly lit yellow lights. Seating is good and does a good job at keeping you comfortable. The place ensures that you end up feeling relaxed. 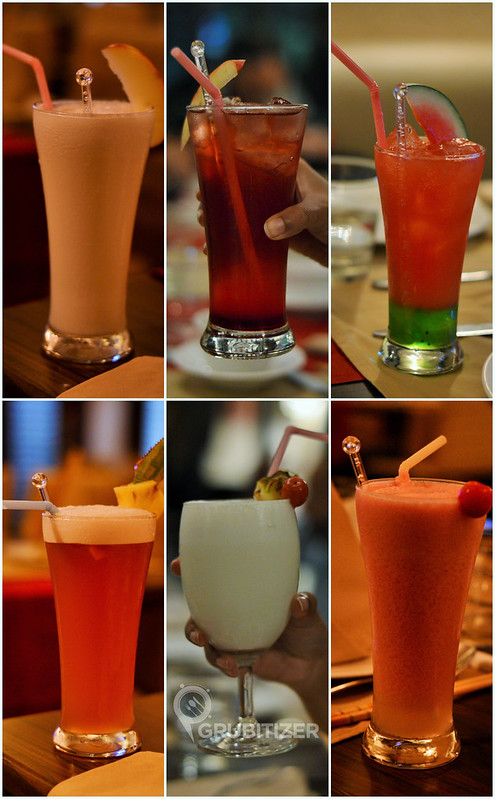 We started off with some soothing mocktails like Triple Shake, Irish Beauty, Pink Panther, Virgin Mojito and many more, each of them had its own surprises. My favorite was Triple Shake, a Kiwi and watermelon based cooler. And as always, it was first ordered by my friend (I never get the drinks part right!!). 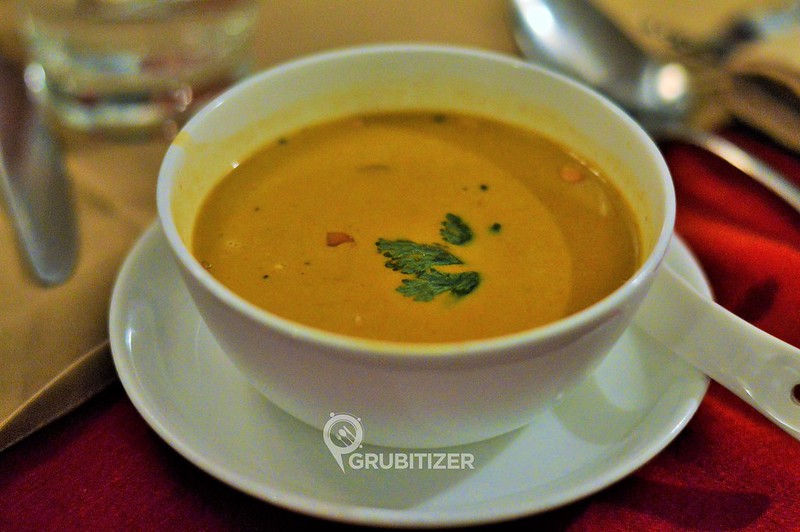 We then started off with their festival specialties. First to arrive was the Sweet Potato and Carrot soup, a Tom Kha Gai like soup which had loads of Coconut milk and peanuts in it to add that much needed crunchiness in this predominantly thick soup. 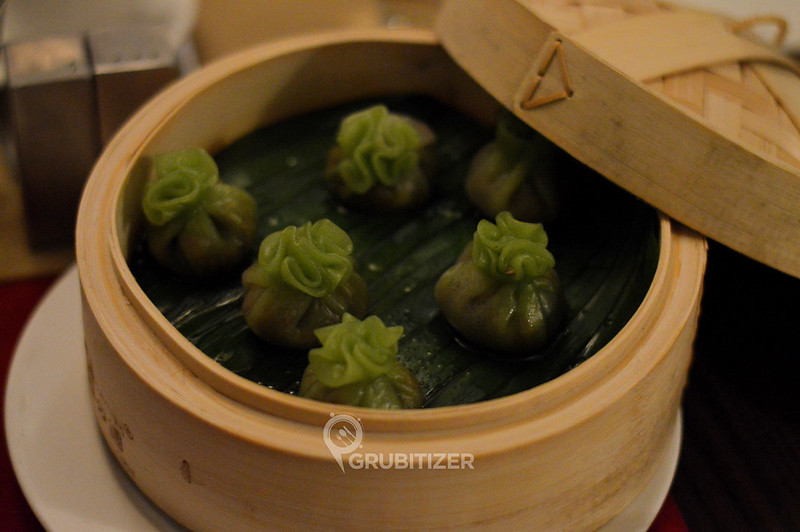 Bokchoy and Mushroom money pouch arrived next which were akin to tiny money bags (plus they were green colored :P), the mushroom and bokchoy filling is draped in two layers of batter- regular wheat starch skin and second one with spinach infused in it. This tiny dim sum tastes best when paired with Soya sauce. 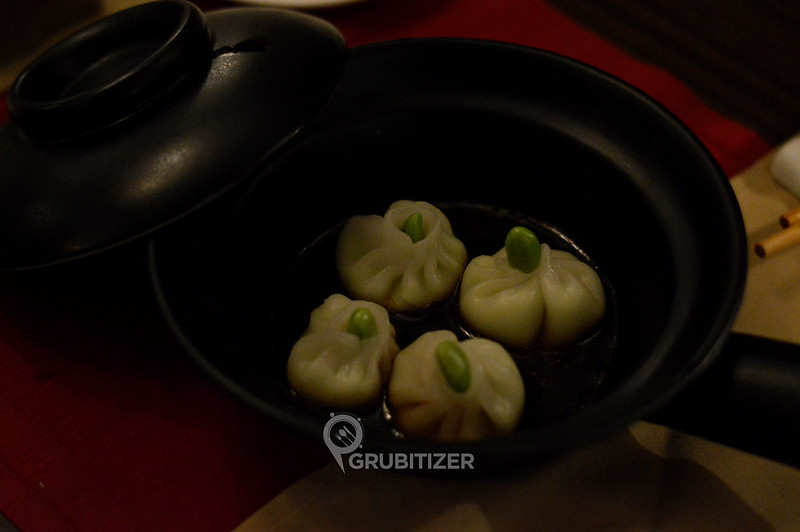 Our next serving was another Dim sum and this time it was tiny white balls topped with actual Edamame – Truffle Scented Edamame dumplings, these are fresh Soya bean mixture with truffle essence wrapped inside tender dim sum layers. This one is a very subjective dish! 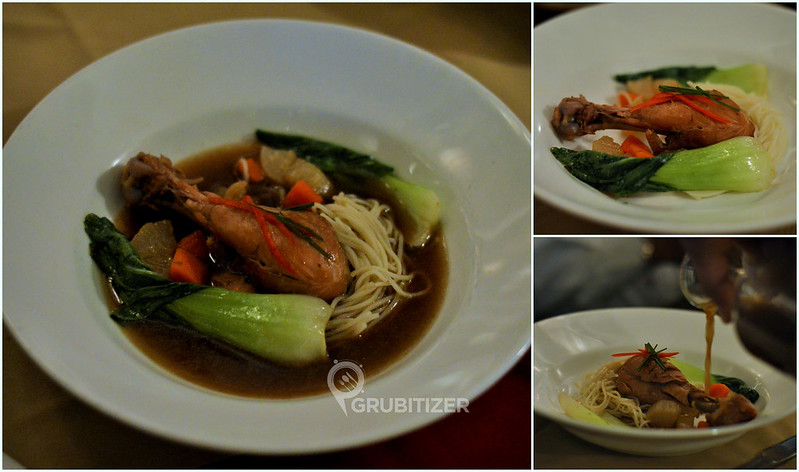 Our fourth serving was another scrumptious looking soup (for non vegetarians only!)- it was the Chicken drumsticks with Noodle Soup, the primary ingredients was chicken in its cleanest form alongside noodles and veggies. They serve the broth separately which is supposed to be added once the soup arrives at your table. This was my favorite as the flavorful broth complemented the tender chicken leg in a very appetizing manner. 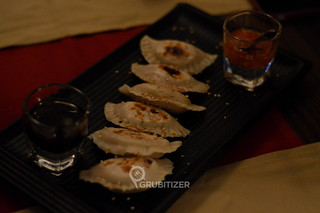 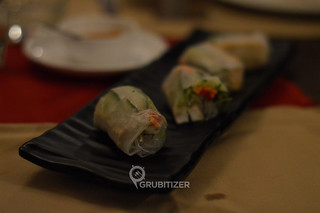 Sesame Chicken Pot stickers (L) are pan fried crispy dumplings stuffed with chicken and onions. The golden fried bottoms and a relatively soft layer on top adds a very a nice texture to this dish. We had it along with the mango chili and soya sauce.
Vegan Vietnamese Spring Rolls (R) was another example of how neatly the dishes were prepared here and of course with a lot of precision. The rice paper roll is almost transparent and houses an assortment of fresh veggies which includes cucumber, carrot and bits of tofu. The roll as such was bland but the accompanied Hoison Peanut sauce and mustard sauce ensured that it had some taste to match its brilliant looks. 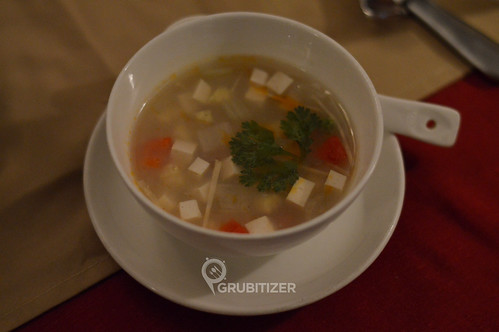 Next soup we had was a clear soup called Sweet and Sour Tofu Soup with Crab meat which had three very distinctive elements in it, but the blend was subtle and extremely well crafted that did not taste inept at all. 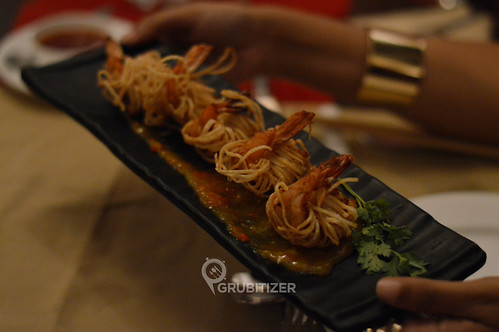 We were served with a dish that belonged to the appetizers menu – Crunchy Wanton Ribbon Prawns, here you get deep fried golden colored noodles stuck over prawn meat. The tiny portions are served over a bed of mango chili sauce which gives a minute tanginess on every bite. 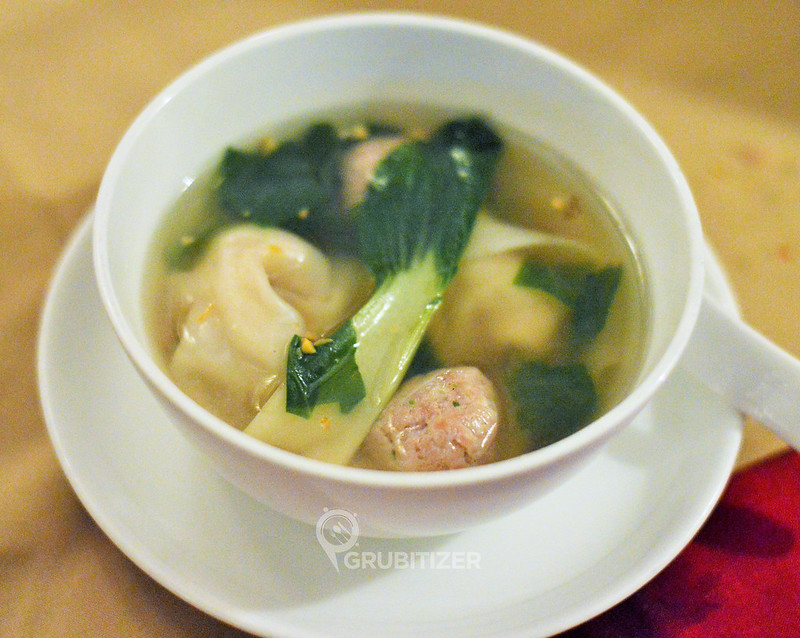 We had so much variety of food by now that I was expecting the desserts to close the chapter, but that wasn’t the case as we continued our eating streak. Chicken meatballs with prawns wanton Soup, another variant of the healthy looking clear soup. 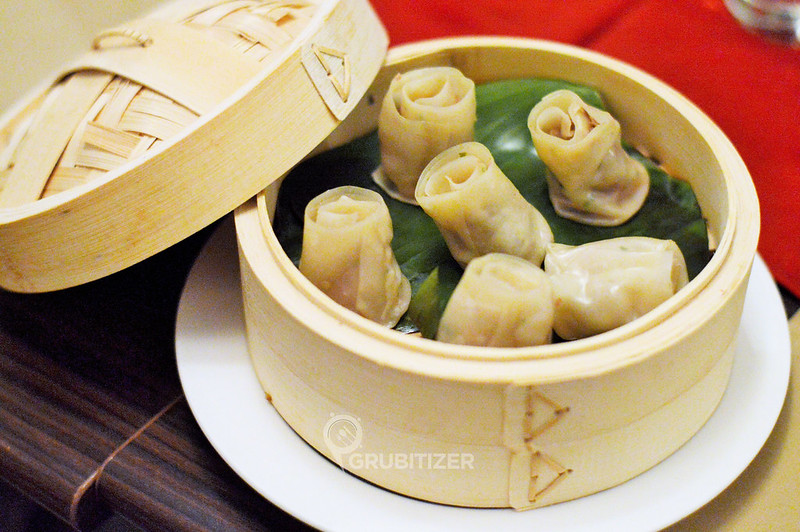 Pork Flower Dumplings are flower shaped Dumplings which is supposed to be had with Soy sauce. The rich pork filling wrapped inside white starch skin definitely is a pork lover’s delight. 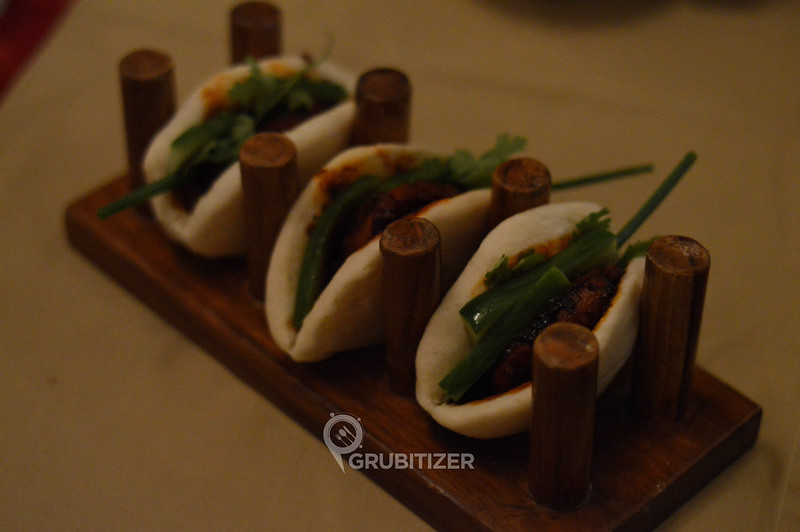 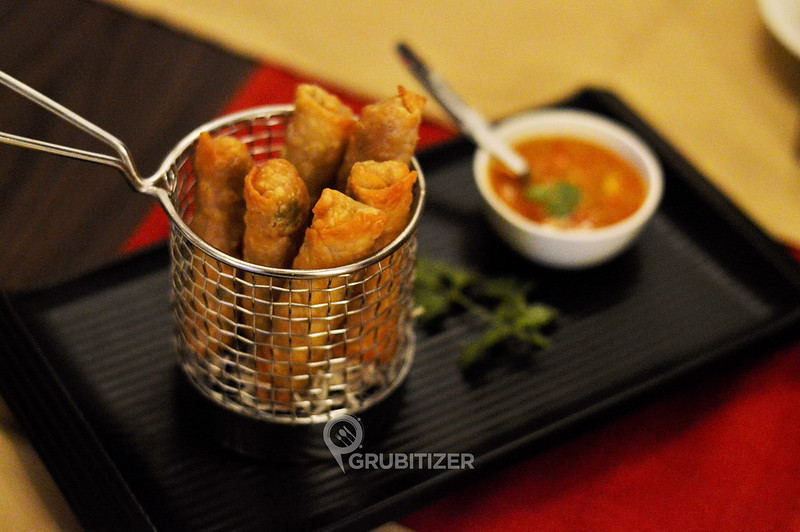 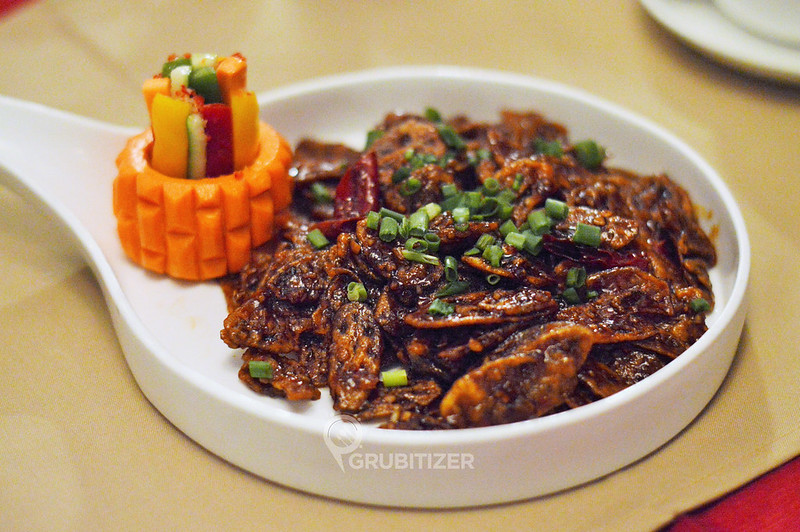 I was in love with their USP dish (from my perspective), The Crispy Lotus Stem Veg which was so popular among all of us that we ordered another portion and that too got emptied in no time! You will enjoy the alternating flavors of this preparation. 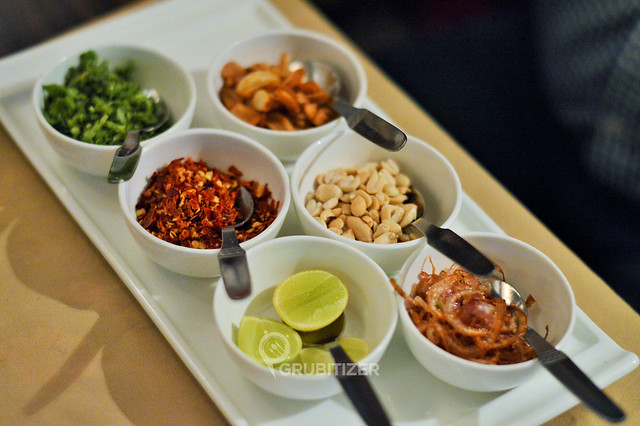 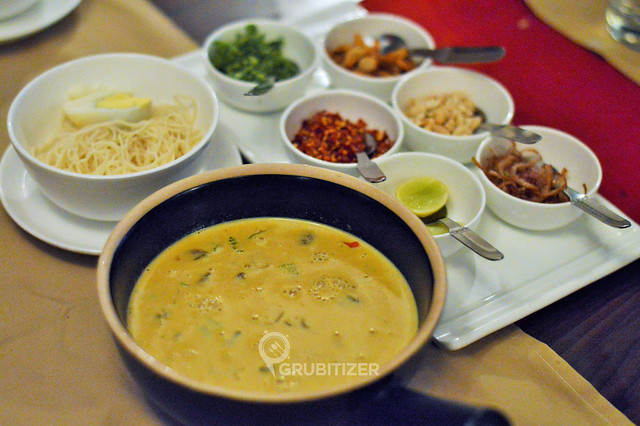 Final main course was Khow Suey, a traditional Burmese preparation which was sort of a D-I-Y as you get separate bowls of ingredients and all you have to do is mix them in right proportions to get one awesome tasting dish. The platter comes with various garnishing options like scallions, nuts, lime and chili flakes along with the thick coconut milk based broth and a bowl of noodles with egg. 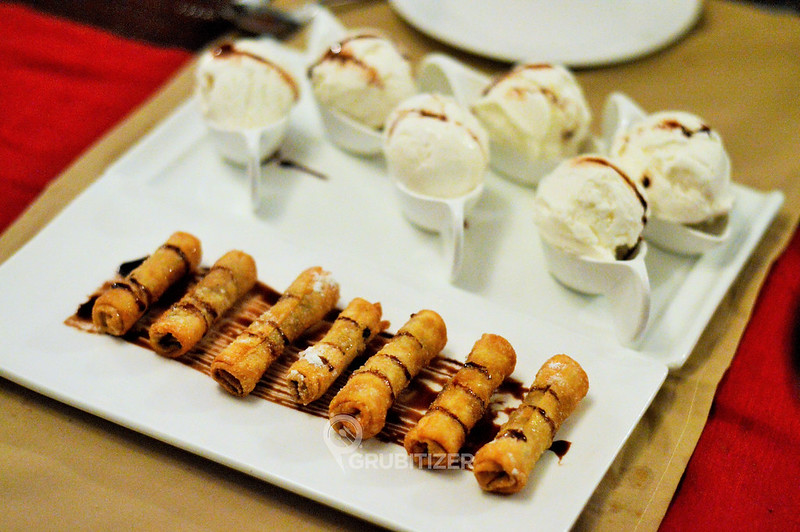 Our dessert was Chocolate Spring Roll with a Dollop of Ice cream. These crispy rolls tasted amazing when had with the vanilla ice cream, there is always something about a fried texture that goes well ice cream and that is what you get in this dessert, I totally loved it. This was a perfect way to end our foodie journey.

GRUBITIZER’s TAKE: The Soup and Dim Sum festival is easily one of the best food festival embracing Chinese cuisine. The melt in mouth Dim Sums and mildly flavored Soups are something which will surely set the tone for you in this monsoon season. Do visit Hunan to savor all of this before 30th August as that’s when the food festival ends.

Take a look at their website by clicking here.

Click on the widget below to visit their Zomato page: