Fairfield by Marriott, Rajajinagar has come up with a one of a kind food festival called the Flavors of Karnataka. This festival aims at showcasing various cuisines from regions of Karnataka like Mangalore, Malendu, Kodagu, Udupi and Navayath. The master mind behind all the dishes included in this special menu is Chef Thirumal, a very humble and down to earth person who knows in and out about the traditional and technical aspects of what goes into the making of these authentic dishes. More details about this food festival can be found in this post, for now allow me to take you through my experience of being part of this native gastronomical journey. 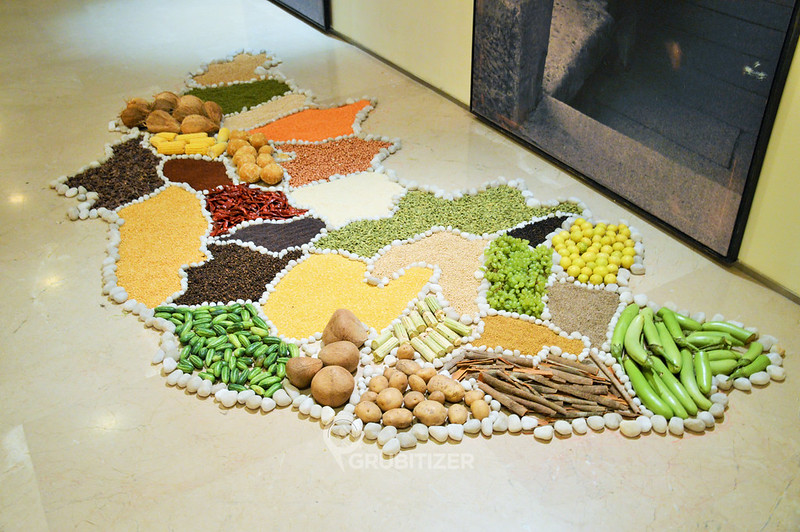 We (me and my friend) were the first ones to arrive at Kava! and this enabled us to click countless pics of the decor without any intrusion as such 😛 The entrance of Kava is decorated with a lot of emphasis given to the actual vicinity of streets of rural Karnataka. 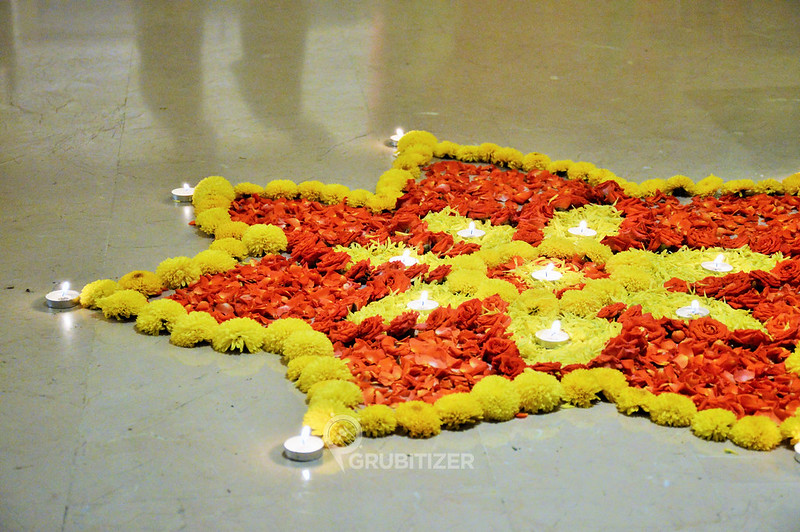 One side is adorned by Rangoli made out of flower petals and diyas and the other one is home to a huge map of Karnataka made out of different food items signifying each and every district in Karnataka. 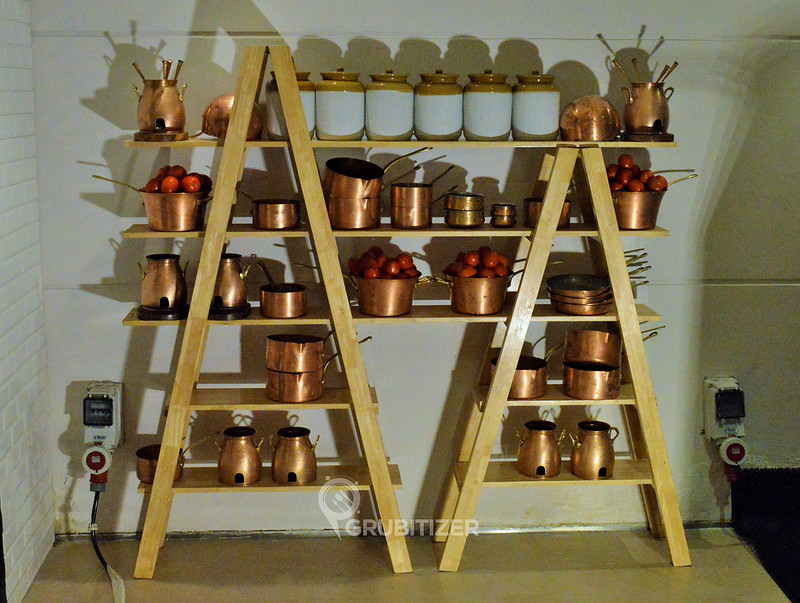 Lot of local touches have been given to the buffet counter as well which goes well with the theme of this Karnataka Food Festival. Overall, they have done a good job of capturing the eyes of patrons when it comes to decor as the music is also in sync with the theme. 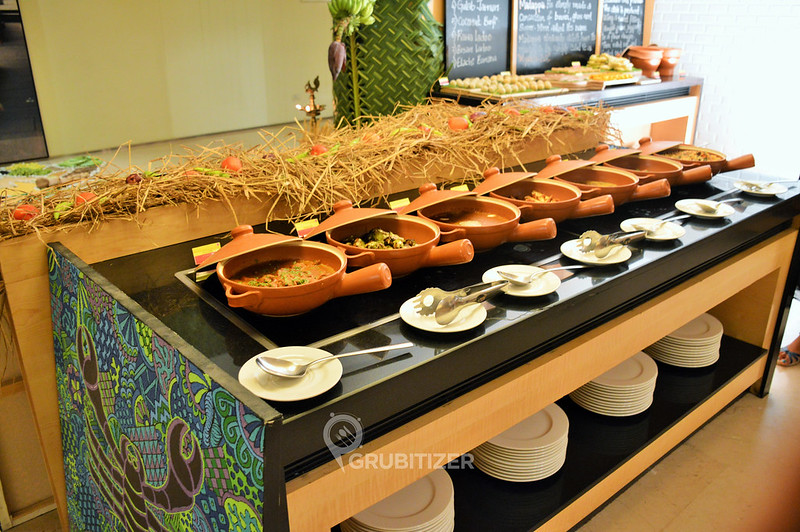 This meet was different from the ones that i have attended so far as the focus was on Kannadiga Oota, something which I have had at marriages and temples only, but not in a five star property. The best part about this food festival is the simplicity in terms of dishes offered. 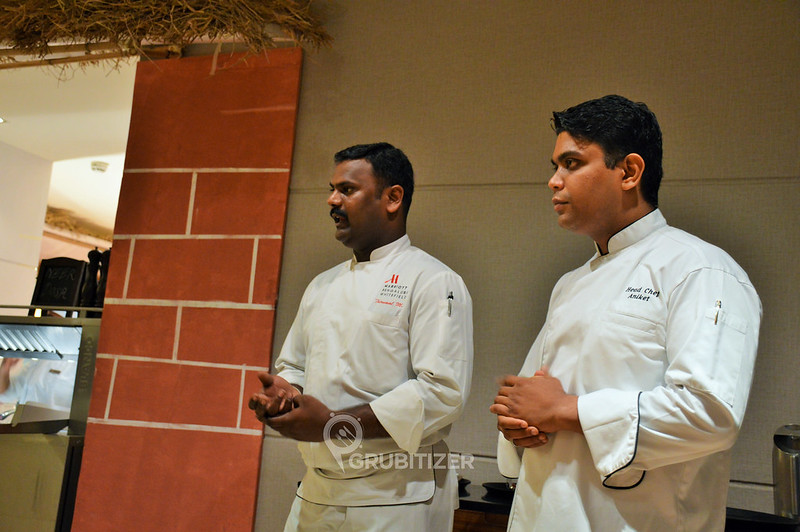 Chef Aniket, the new head chef of Fairfield gave us insights about the importance of hosting this food festival along with his personal experiences of growing up in the field. Then we witnessed a short talk from Chef Thirumal who hails from Kolar and specializes in Karnataka cuisine. This is the 16th Karnataka food festival that is being organised under his guidance. 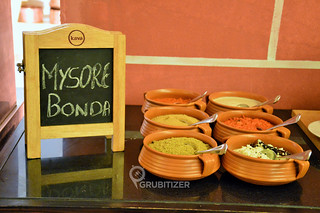 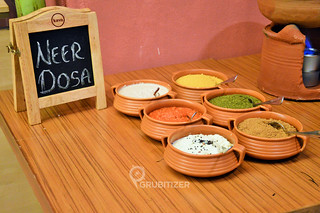 The spread is distributed evenly on all days as they are following a cyclic menu, this is synonymous with the fact that each day the chefs are going to focus on specialties of one particular district. 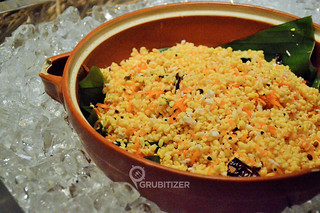 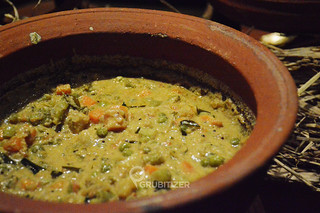 After we were seated, the dishes kept coming by one after the other which were served on banana leaf. It is interesting to know that each dish has its own place on the leaf (which I wasn’t aware of!!) 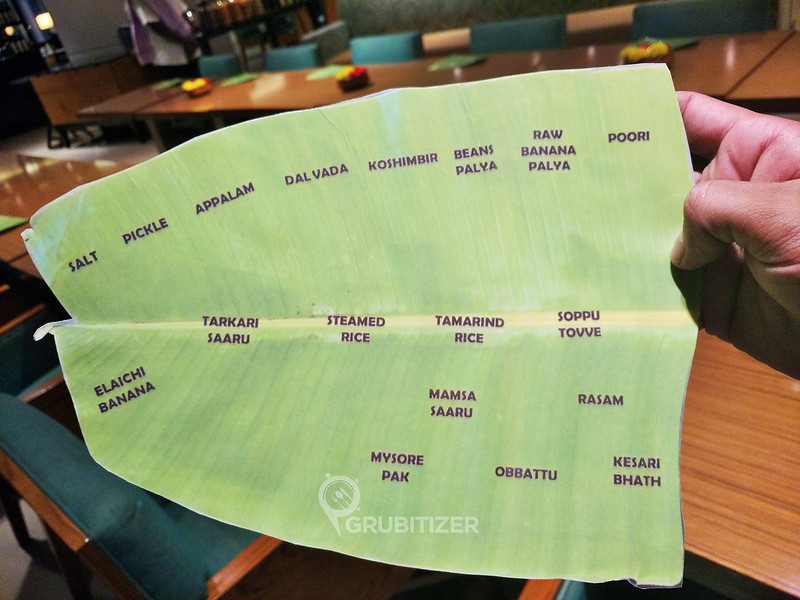 Placement of every dishes !

All of this starts with salt, pickle and Kosambari which is then followed by side dishes like Balekai Palya and Beans Palya. I have had very little experience of having food in this style, and most of it is limited to temple/marriage visits only and have observed that people usually start digging into these sides while waiting for the next course to arrive 🙂 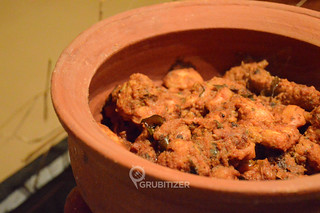 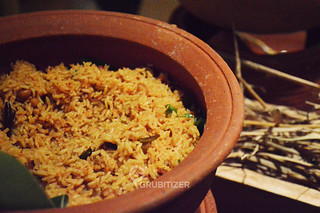 I liked the combination of Puri and Southkai Kadalae, a thick gravy made from an assortment of veggies like beans, carrots and peas, but the main ingredient cucumber adds a very unique taste to it. Rice is something which is the most prominent part of South Indian Oota. Steam rice here is paired with Saaru, Rassam and Curd which tends to get pretty heavy and that’s one reason I decided to stick to Mamsa Saaru (Mutton curry) with rice and skipped Rassam and Curd! The other rice preparation served was tamarind rice.

This is how how our dinner looked!!

For desserts we had Obbattu drizzled with Ghee and the very famous Mysore Pak. Our dinner ended with a round of filter coffee which was being prepared at a live counter. 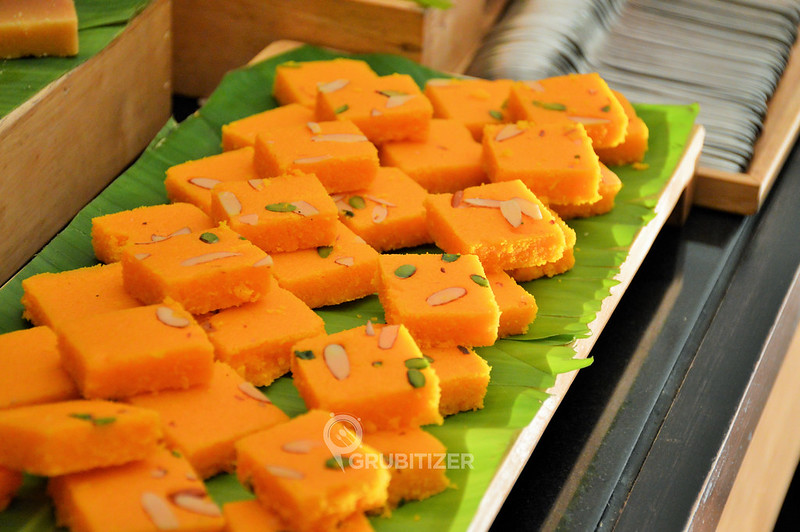 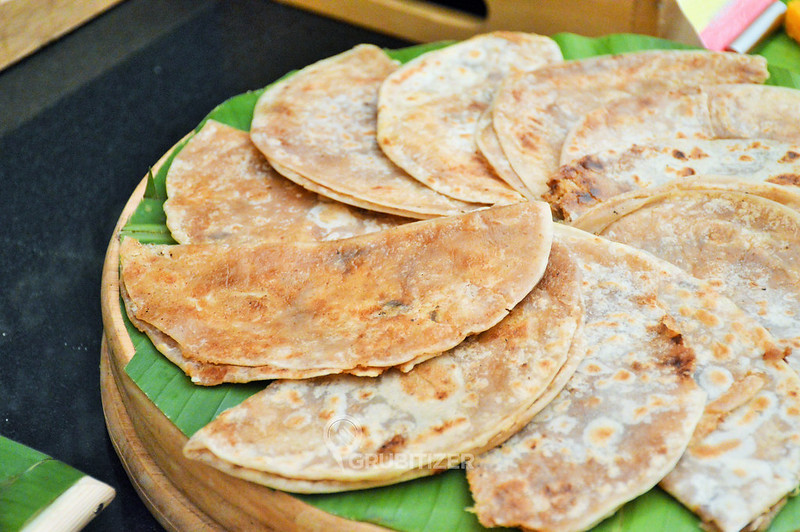 The counter looks exactly like a road side Tea/Coffee stall which houses loads of accompaniments like Khara Mixtures, Muruku, Till Ladoo and Puffed rice balls kept in glass jars which look exactly like the ones you find them at these stalls.

Choice of Pickle and spices

The festival is a wonderful tribute to Namma Ooru in terms of food and a offers an amazing opportunity to find each and every traditional preparations of Karnataka cuisine all under one roof. So, head over to Kava at Fairfield by Marriott, Rajajinagar to experience this culinary showcase as the festival ends on 3rd September. Note, the food festival spread is offered for dinner only, i.e between 7 PM to 11 PM. Prices for the same are INR 1000/Adult and INR 500/Child excluding taxes.