I would like to share a quote by Ernest Hemingway which goes like this – “As I ate the oysters with their strong taste of the sea and their faint metallic taste that the cold white wine washed away, leaving only the sea taste and the succulent texture, and as I drank their cold liquid from each shell and washed it down with the crisp taste of the wine, I lost the empty feeling and began to be happy and to make plans.”. The quote tries its best to showcase the beauty of pairing wine with your favorite food and vice versa. 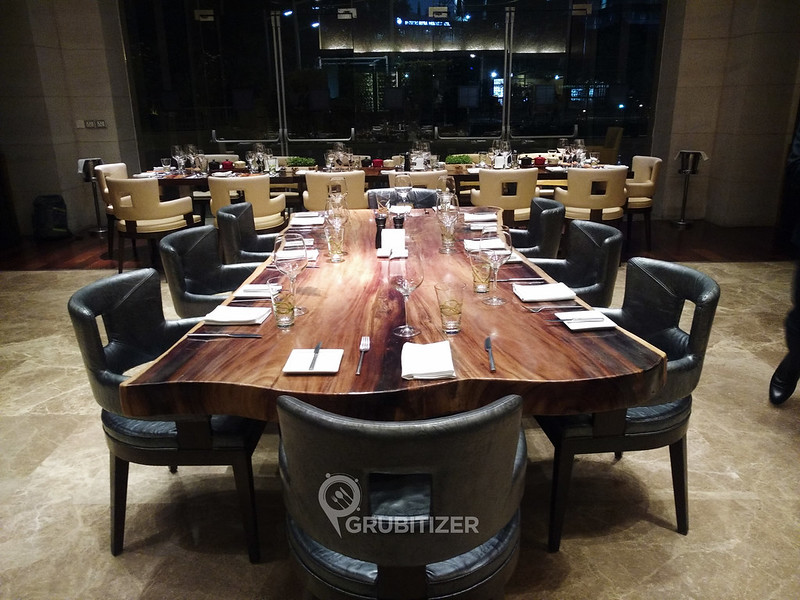 I was at my work location when I received an email which had an invitation to a Wine & Food pairing session, the proposition sounded interesting as I went through the contents and immediately made my mind to accept it!

Reason – 1: I am not much of a wine person probably because I always end up choosing the wrong one which does not go well with the kind of food I order.

Reason – 2: Wines are complicated to a majority of us (including me)! 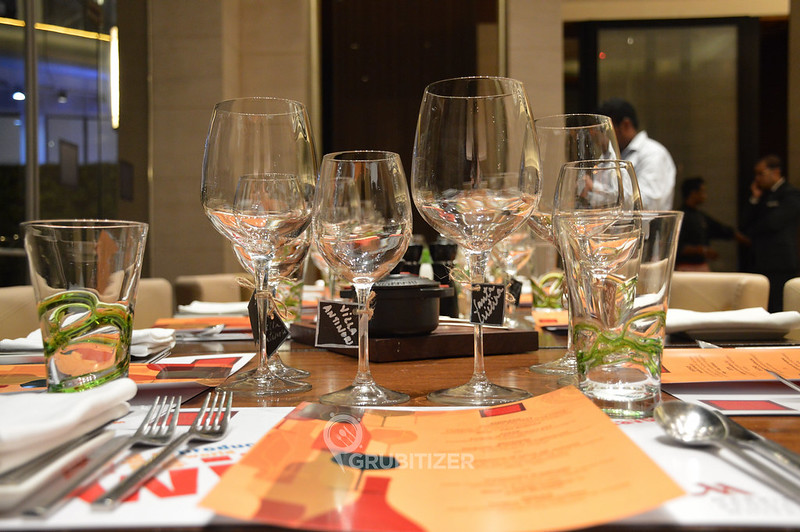 Soon to be filled Wine glasses

Alto Vino at Marriott, Whitefield decided to host a bunch of media personals, bloggers and wine aficionados to an intimate round table where Viraj Sawant shared his experience from around the world about working at Michelin star restaurants and the art of wine pairing. 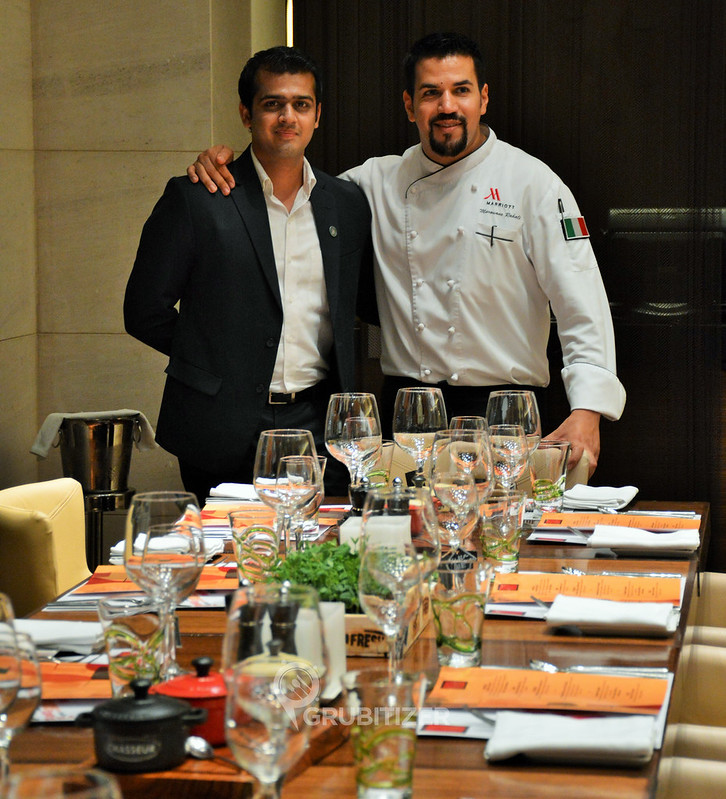 This was co hosted by Italian chef at Alto Vino, Chef Marou who also demonstrated the best ways to pair wine with different courses of Italian cuisine. Viraj is the brand ambassador and Sommelier at Berkmann Wine Cellars and was previously the Head Sommelier at Michelin Star restaurant, La Trompette in London.

Our exclusive wine dinner began after a round of self introduction which turned out to be helpful to know and bond with others who were part of this dinner. One glance at the menu and it was evident that Chef Marou had put in extraordinary effort in cooking all the food that was going to be served. 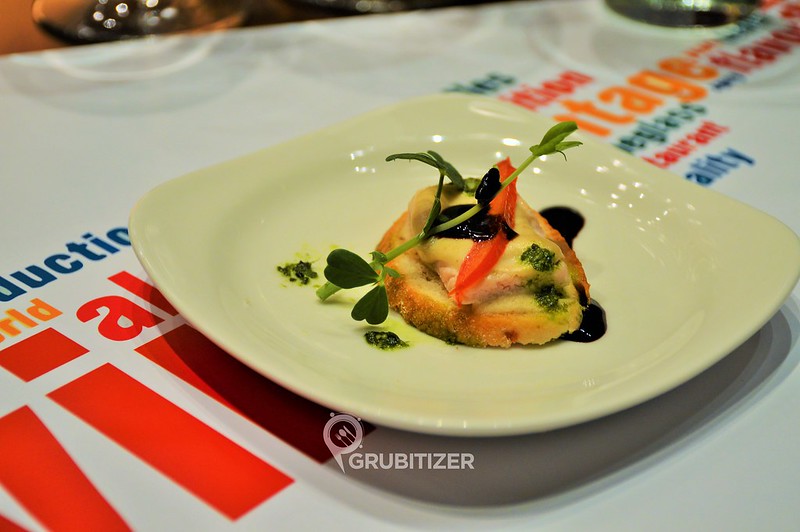 Amuse Bouche was Chicken Bruschetta, a delicious bite sized delight with Cheese, pesto topped with fresh tomato slices. What followed next was a slow and steady proceeding of one course at a time where Sommelier pitched in with his inputs to explain the reasons behind every set of food-wine pairing. 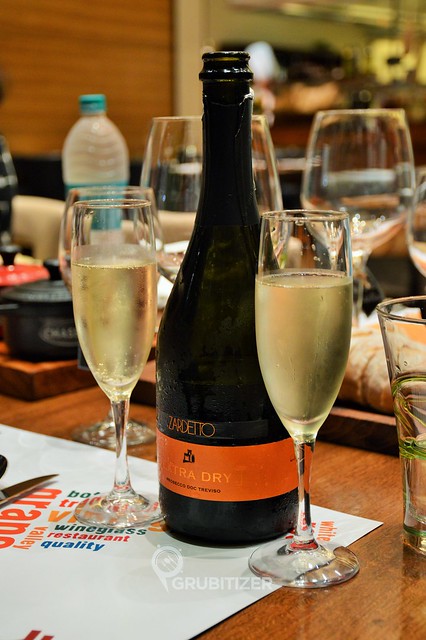 1) Zardetto, Prosecco DOC Extra Dry – a sparkling wine which comes from the Eastern end of Italy called Veneto. It has got the same sparkling effect as a champagne but in terms of taste is much more softer, lighter and has lot of fruity notes. It has a little citrus character which is more inclined towards lime. The climate in Veneto tends to be on warmer side so the wines are very mineral and easy to drink. 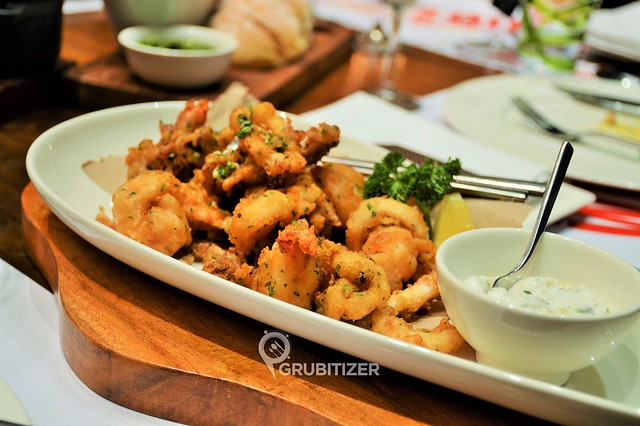 The wine goes perfectly with Antipasti which should contain a lot of fried food. We were served with Frito Misto which came in both vegetarian and non vegetarian variants. Veg folks had fried Zucchini and Artichokes whereas the non vegetarian version of the same dish consisted of fried Calamari and Shrimps. 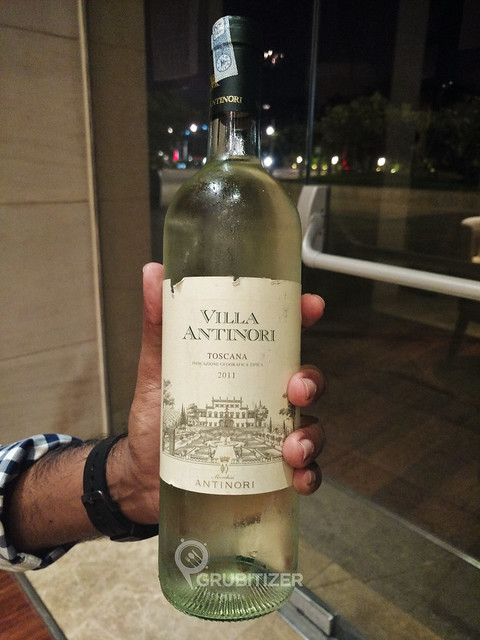 2) Villa Antinori Bianco, Tuscany, Italy – A wine which is indigenous to Tuscany and processed at the foothills instead of higher altitudes. Since they are from the lower sides of the hills, the climate tends to get slightly warmer which ripens the grapes resulting in a slightly more acidic character. The wine has a dominance of green fruit flavors like Green Apple, Pears and Lime. It is not very heavy and bulky overall and goes well with Raspberry salad dressing which also imparts a lot of acidity to the food. 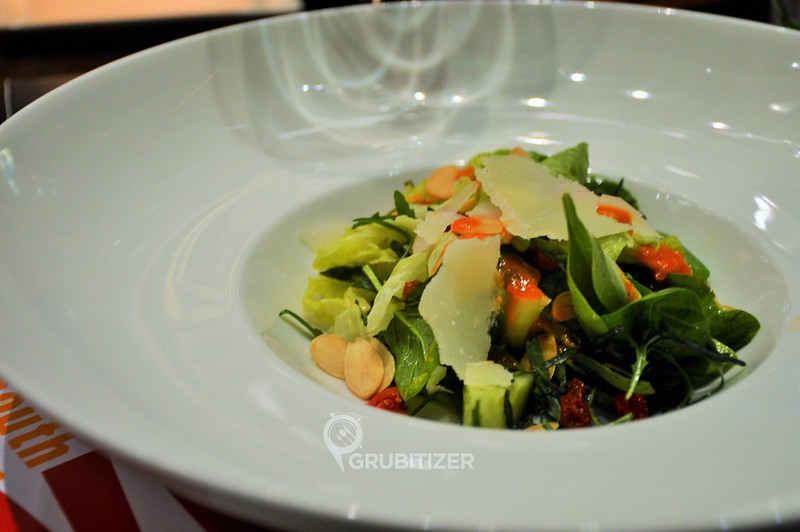 This wine was paired with a salad called Insalata Sana which was a brilliant combination of organic greens with Goji Berry tossed with Asparagus, Toasted Almonds, Tomato Confit and Raspberry vinaigrette. 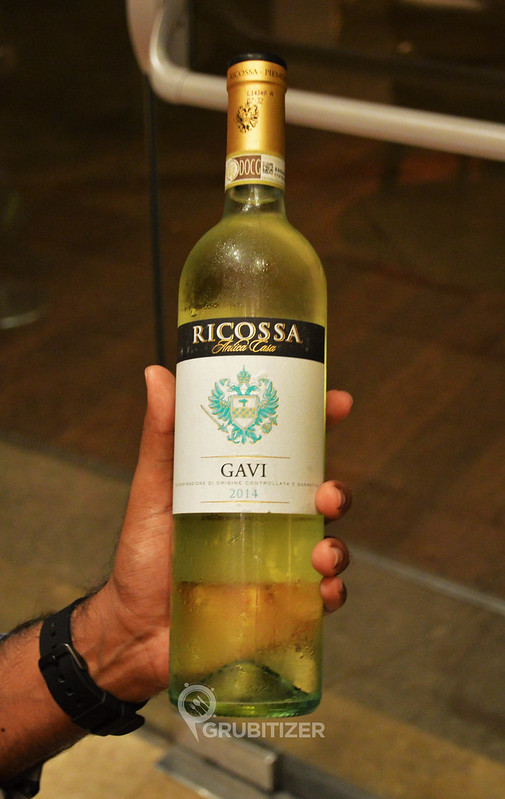 3) Ricossa Gavi DOCG, Piemonte, Italy – This is wine from a much cooler part of Italy, which is Piemonte. Vineyards on hill slopes, so a perfect balance of ripeness from the sun exposure and lean mineral acid back up due to cooler nights. This wine is very subdued and restrained if compared to the first one, it needs a few minutes to open up in the glass. It shows a lot of minerality on the nose and the palate, with candied citrus and flintyness. It also shows a bit of bready complexity still holding the bright acid. 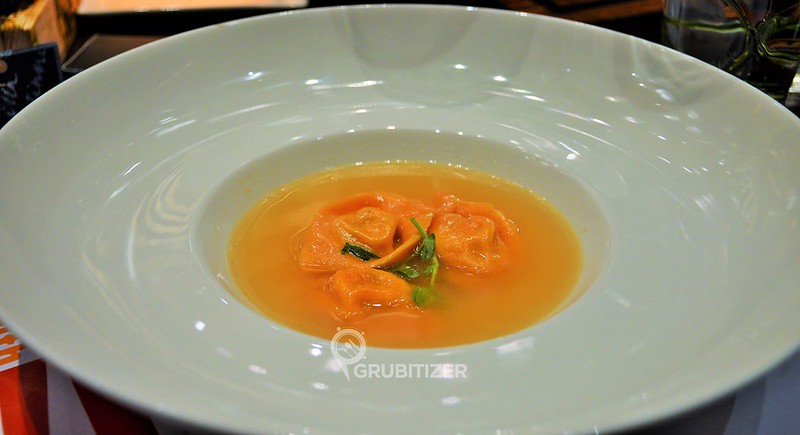 The cool climatic conditions of this wine naturally relates well with a preparation that is savored the most during winters – Clear soup. So the chef prepared Acqua Di Promodoro which is clear tomato soup with Asparagus tortellini to pair with this wine. 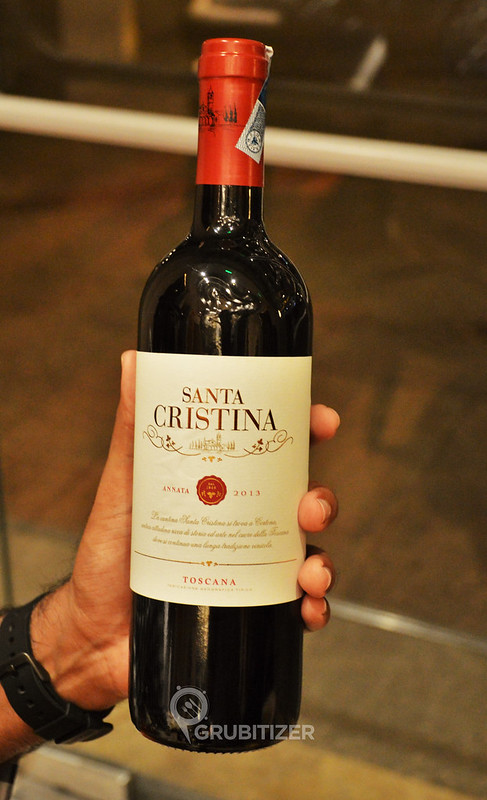 4) Marchesi Antinori,Santa Cristina IGT, Tuscany, Italy – This wine is adorned with Raspberry, lots slightly less ripened grapes, cherries and most of the red fruits. this wine can’t be termed as sweet as there is a lot of acidic character to it. Let it remain for some time in the glass and the wine shows its savory side of meatiness and earthiness. It surely can be called as a connoisseurs wine which also is a much drinking pleasure. 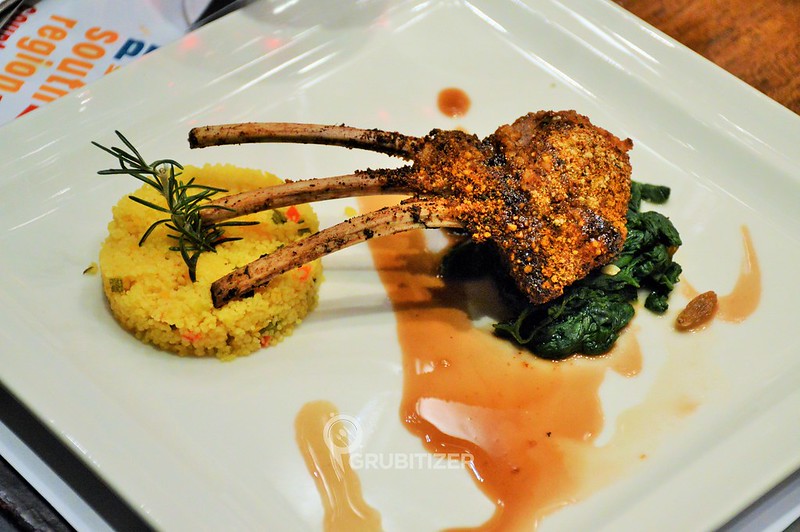 A complex wine like this needs a complex food to item to go well with it and the chef did a good job of pairing this wine with Costoletta D’agnello. It is Herb crusted lamb rack served over a bed of spinach dry raisins jus reduction. Meat that I ordered was well done and I could easily break into it. The herb crust on the lamb meat did impart a lot of exciting flavors to the overall preparation. 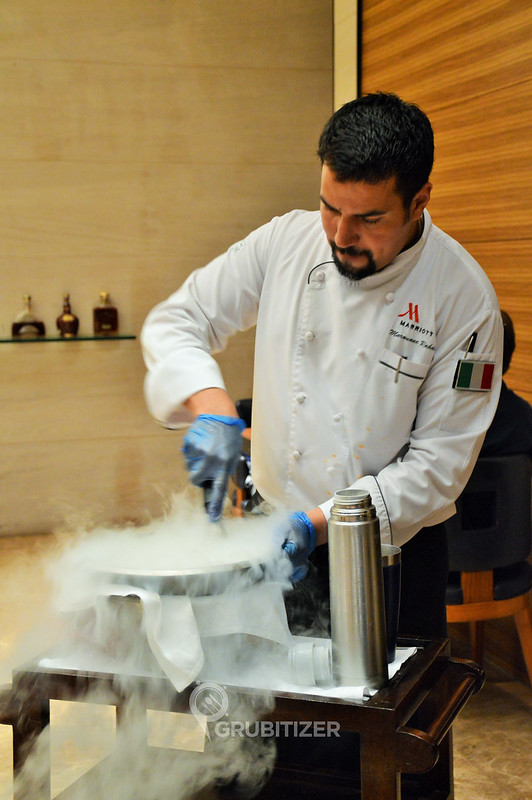 After indulging is what can easily be called as a perfect Italian dinner we were looking forward to the dessert section. The menu said that we’ll be served with Tortino al Cioccolato which is dark chocolate flan with home made Vanilla ice cream. we had some drama here while waiting for it in the form of live ice cream being churned out by Chef Marou. 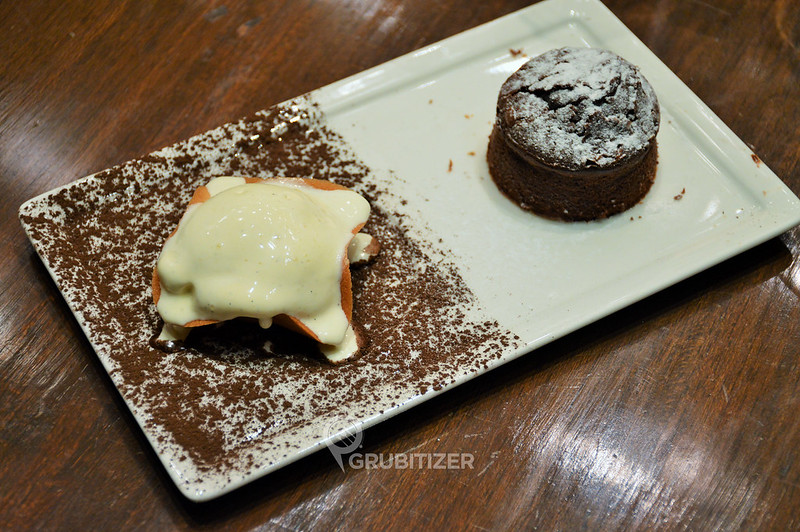 The sight of liquid nitrogen being poured in the fruit puree/cream definitely managed to catch the attention of other guest around. The end result was one awesome tasting ice cream which had the right texture and flavor, it was equally well complimented by the chocolate flan. 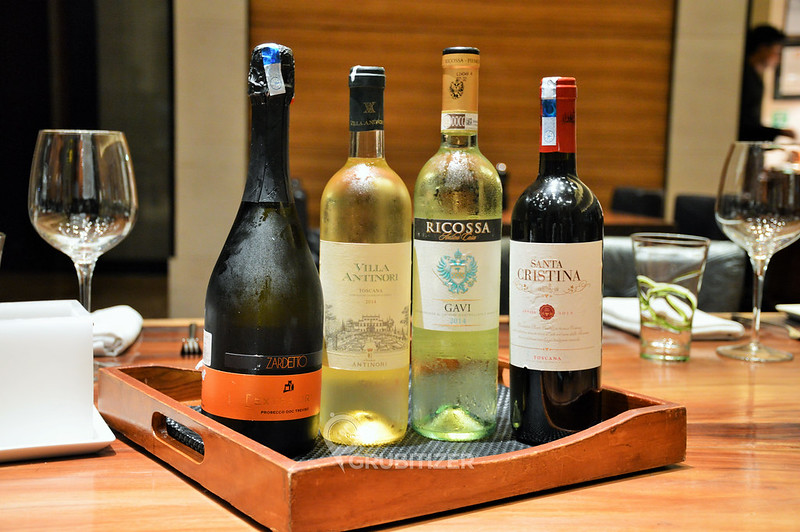 Parting shot of all the wines served

This interaction over dinner did manage to impart a lot of knowledge around wine! Chef Marou’s preparations were exactly like how they were described and it was very consistent throughout all the courses. Viraj Sawant can easily be called the best host when it comes to talking about wines, his introduction to every wine beings with geographical origin and then goes on to little technicalities of what goes into making of these wines followed by the taste and various notes associated with it. There is so much more about wine that needs to be experienced and events like these help us in connecting with wine in a very intimate manner.

Click on the link below to navigate to Alto Vino’s Zomato Page: