Farzi Cafe, a place globally known for creating an illusion with its cuisine has finally marked its presence in Namma Bengaluru. Farzi Cafe is a part of Massive Restaurants Pvt Ltd which also houses two other multi award winning brands under them – Masala Library and Made in Punjab. It follows a concept of Modern Indian Bistro which means it amalgamates traditional global cuisines with Indian classics and adds drama in terms of contemporary presentations and culinary styles. A visit to this place is sure to leave you bemused as the experience does not stop at food, instead it wraps you under the blankets of curiosity and interest as the cafe incorporates molecular gastronomy and various table theatrics to keep you entertained till the end.

Farzi Cafe was launched in Bangalore in the most epic and grand manner, it became and is still the talking point among a large group of food lovers in namma city. I was here on two occasions – first during one of the pre-launch meet and later on when I accompanied my blogger friend for dinner where we sampled a wide range of delicacies and cocktails. 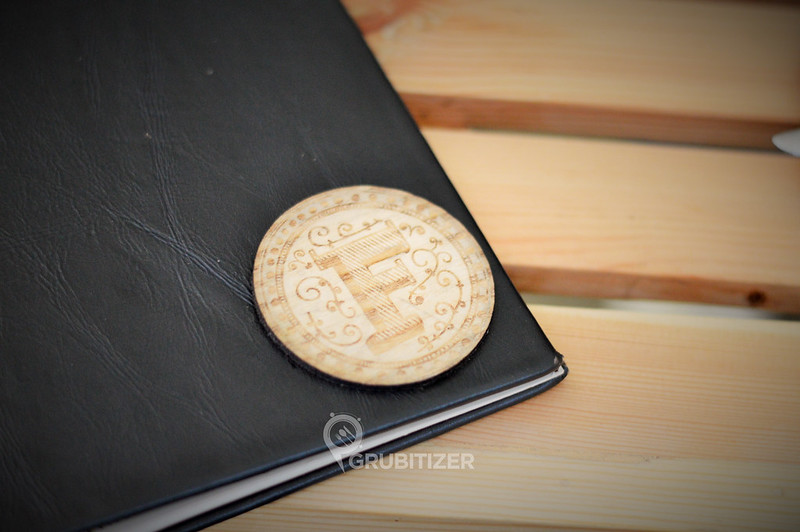 The place is brightly lit and it easily manages to get your attention the moment you step into the Piazza of UB City level -2. There is a section which is exclusive to Bangalore chapter of Farzi Cafe and that is the ‘Brewery’! It is a good move considering the fact that Bangalore pub crawling crowd know their beer and having a brewery in house makes Farzi Cafe even more irresistible. 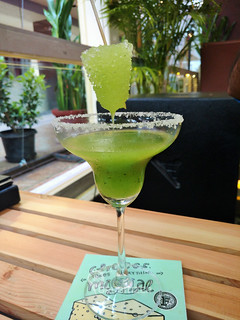 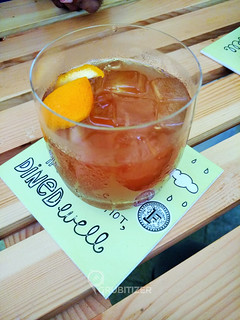 Chuski Margarita is a Tequila based drink with raw mango reduction in it. Pretty straightforward drink till you add the ice gola or chuski as it is commonly known. The feeling of getting high on the gola is kind of Nostalgic, but back then it was sheer happiness and now it was about getting tipsy! 😀

Three Musketeers has a lot of smoky essence to it because the drink is shoved with it before it reaches your table. This whiskey based drink has 3 contrasting flavors of chocolate, orange and cinnamon. This was my favorite even though I am not a fan of whiskey, goes on to say how well it was made 😉 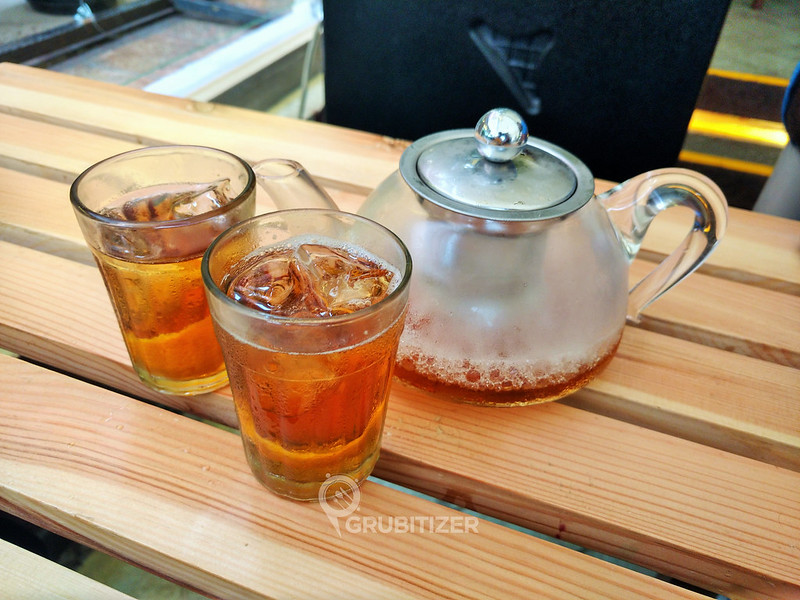 Chai Pani here is a looker!! As the name suggests, it comes in a smoky kettle just like you would want your morning chai to look like. It is a tea infused cocktail with a Vodka base and a tinge of Orange flavor. The flavors of Assam and Darjeeling tea is evident and the overall fusion is so well made that it is a must have in my opinion. 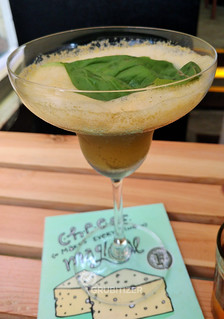 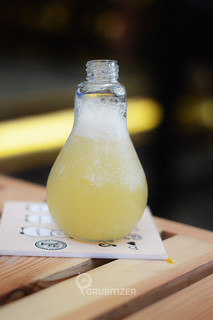 Vodka Curry Mango Chutney: The cocktail has some elements of Desi drink and it is has a taste that revolves around sweet and sourness. This vodka based drink is infused with Curry leaves and for some reason I felt it was a bit strong overall, my friends liked the intensity though.

Farzi Idea is a mild concoction of Vodka and home made absinthe. You get hints of Pineapple and lime which tries to keep the intensity of the drink low and it does a good job at it. The way its served in an inverted bulb gives it a very quirky look. 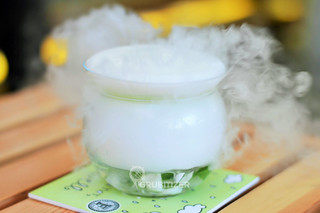 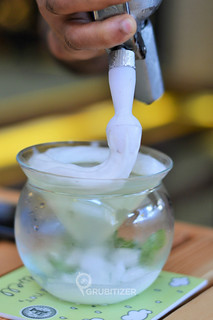 Farzi Apple Foamentini is a vodka based drink with infused elderflower and topped with Mint foam. The drink is prepared right in front of you and has a lot of theatrics to keep you entertained. 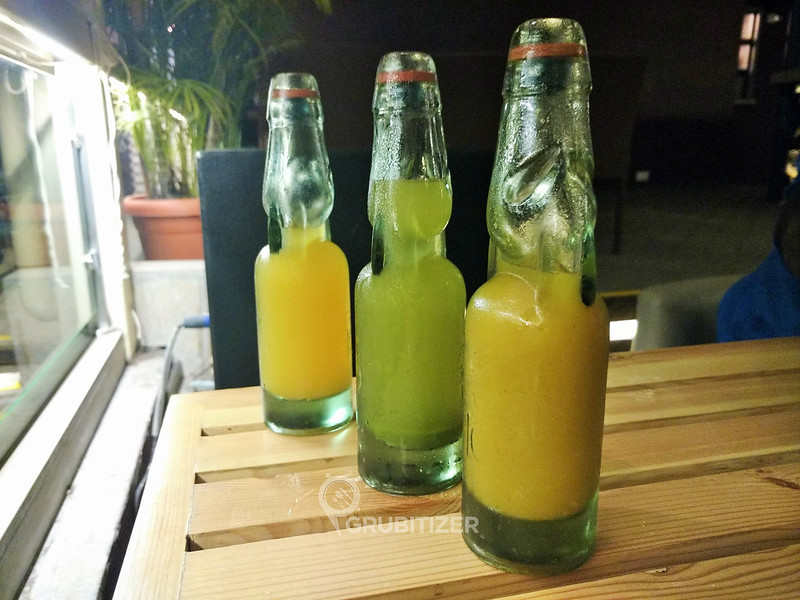 Santa Bunta translates to Goli Soda which is a popular drink of bygone age 😛 Here you get it in flavors like Aam Panna, Shikanji, Narangi and Panakam and we tried the first three and these vodka based drinks taste so much similar to the actual Goli Soda with respective flavors. 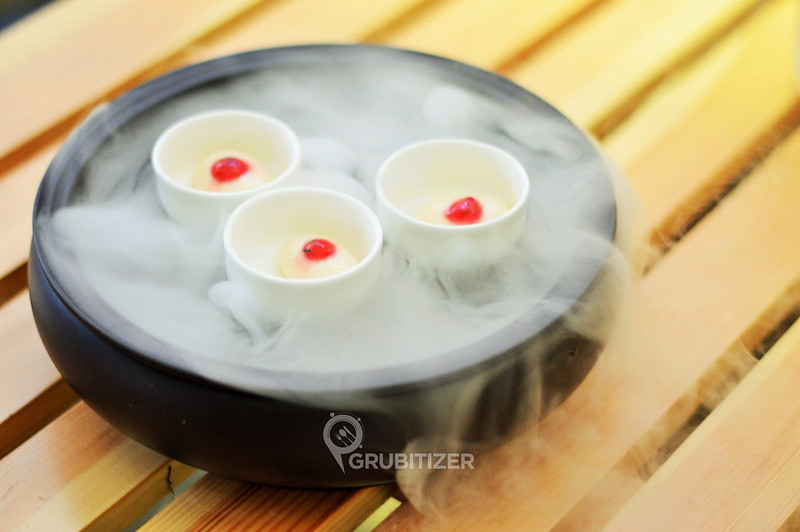 Amuse Bouche was Molecular Mishti Doi which is a Bengali preparation and in this case they are bite sized chunks of Sodium Alignate and Calcium Salt with a drop of berry sauce on top. The smoky effect of the setup makes it look interesting and this scores full marks for presentation! 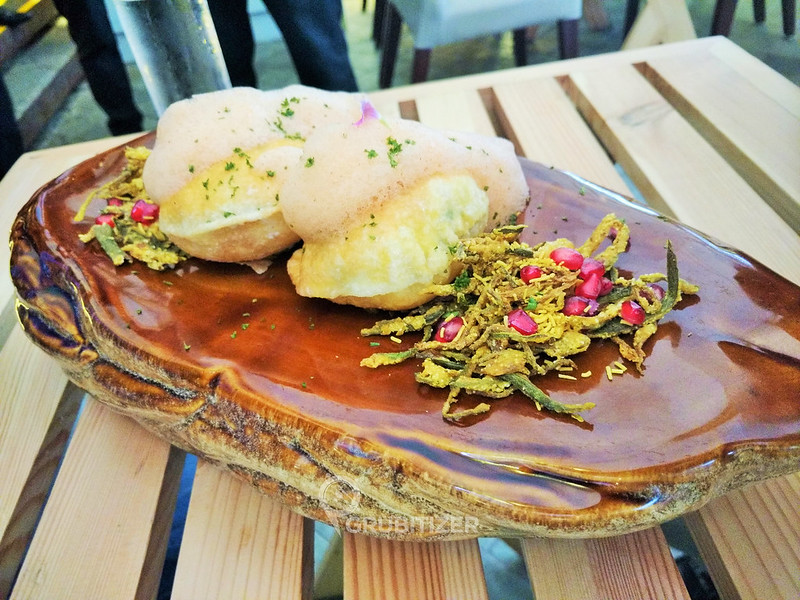 Post this we had Raj Kachori Chat, now this Rajasthani delight tends to get heavy on your stomach but Farzi Cafe has tried to keep the fats down by using Chutney foam instead of actual thick chutney (Sauf Chutney is used). It is accompanied by Crispy Okra Salad. 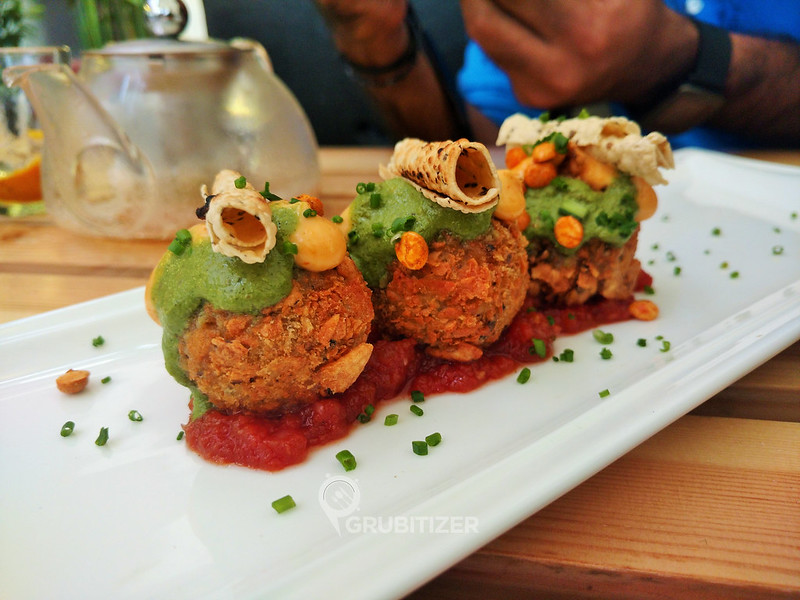 Dal Chawal Arancini in simple terms is Khichdi balls fried with Papad and according to my personal experience, this is by far the best way to have Dal Chawal which otherwise is a very boring combination! The dripping coriander chutney and cheese along with tiny Masala Papad on top adds a lot of mixed after flavor to this dish which is served on a bed of tomato and onion salsa. 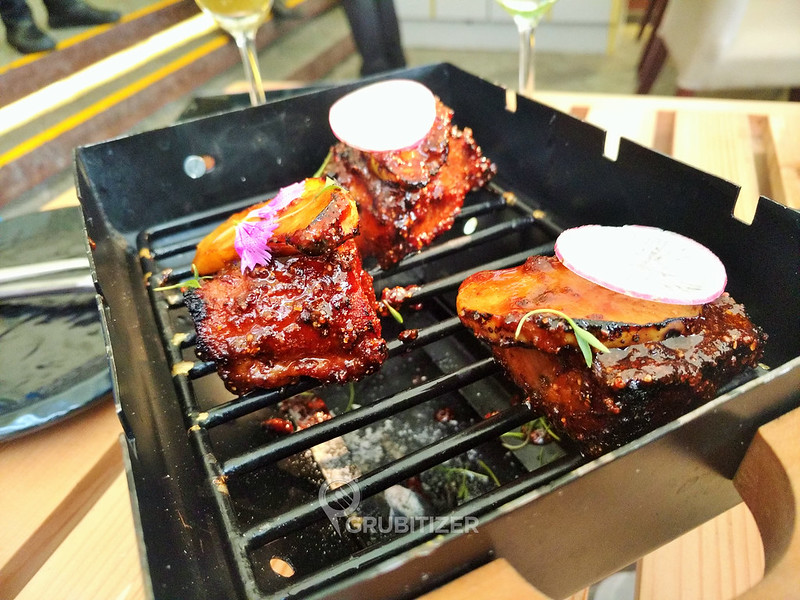 Delhi Belly Pork is one preparation which caught my attention during the pre-launch party and I was just waiting to have this during my second visit. It is served in an open bbq grill like setup. The pork chunks are braised in plum and pomegranate salsa which makes the overall taste delightfully sweet making it an instant hit! 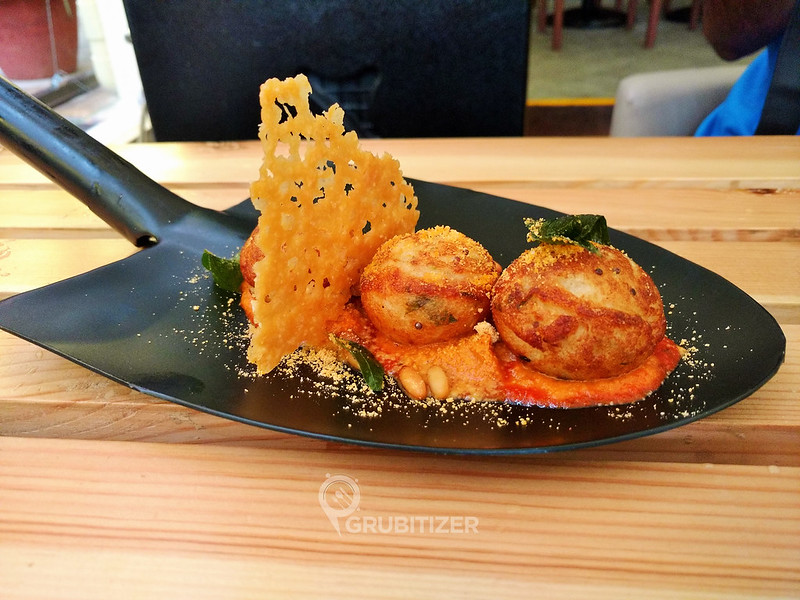 Paniyaram – This simple South Indian preparation has some twists like you get tomato coconut based chutney instead of the traditional coconut chutney which changes the overall feel of this dish. You can also find bits of cheese in every bite and this actually goes well with the scattered gun powder. 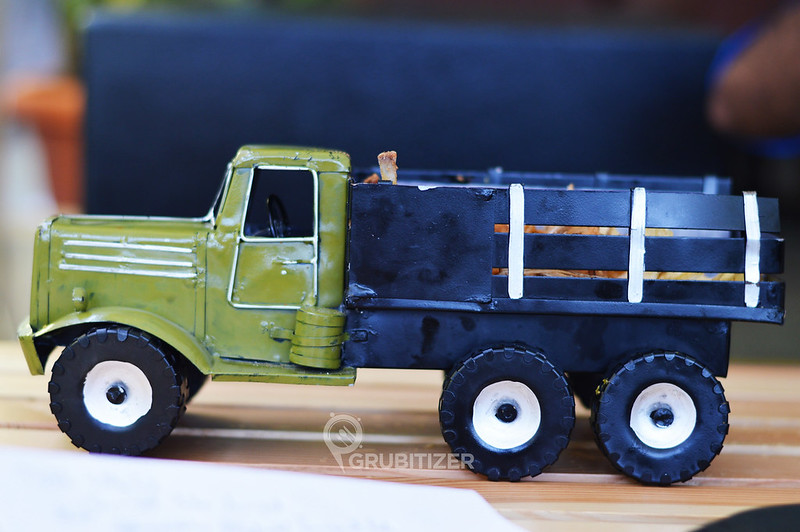 Farzi Fried Chicken comes in truck laden with fried Chicken lollipops along with Lotus and Potato chips. It is accompanied with barbecue Mayo dip which surprisingly did not find any place in the truck 😛 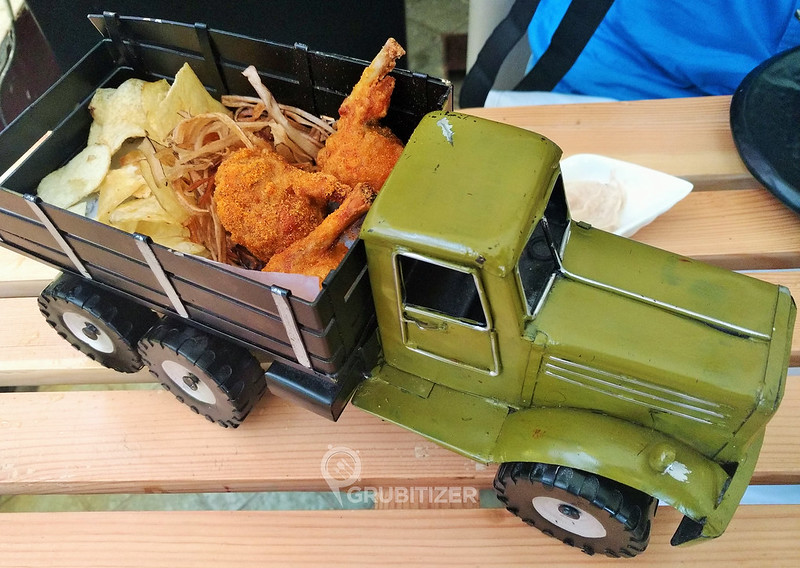 The chicken is fried to perfection and the chips ensure that you are constantly munching on something!

Besant Nagar Chilly is a dish exclusively available in Bangalore’s Farzi Cafe, at first glance it looks like Chilly Bajji (a very vague thought!), but have one bit and you will realise it tastes totally different as the filling here is dominated by a lot of cheese. It is served with tamarind and chili sauce. 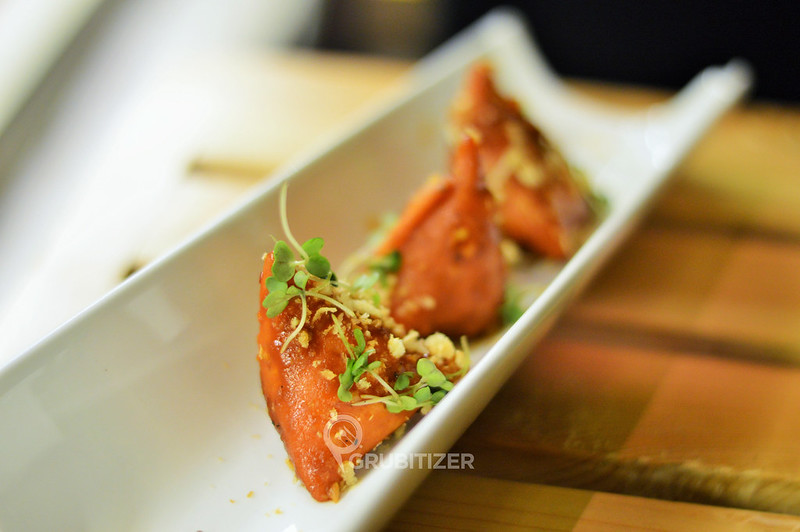 Our next appetizer was Samosa which sounds pretty ordinary in a place like Farzi Cafe, but this is not any ordinary Samosa with Potato or chicken filling, instead you get spicy duck meat inside. It has a plum coating on top along with some garnishing which gives it a mix of sweet and spicy taste. 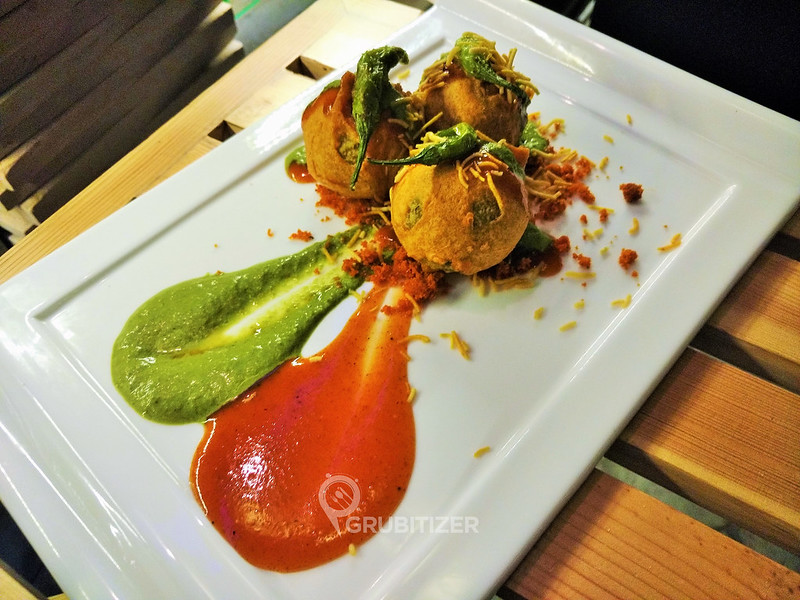 Vada Pav here is one of those dishes which can easily relate to the name of this cafe – Farzi. Am sure its gonna amuse you if this is the first time you have come across Vada Pav here as all you can see is the vada but no pav! So the Vada actually encloses the Paav, it sounds lil astonishing as to how this is achieved but yes, I too have no idea about it 🙂 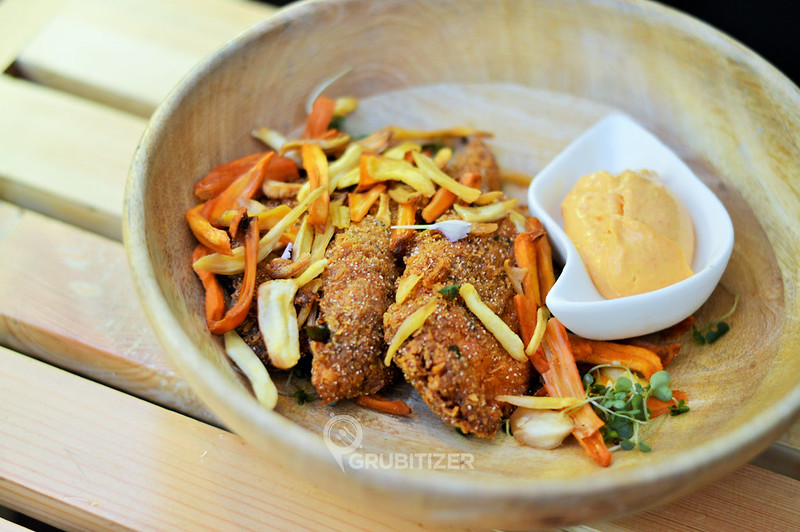 Varatathu Fish Cutlets takes a good chunk of inspiration from Kerala style Fish fry. The crust is made up of panko and sesame. Jackfruit and Tapioca chips that come along with it goes a step beyond to project the origin of this item on their menu. It is served with mayo sauce but I preferred to avoid it. 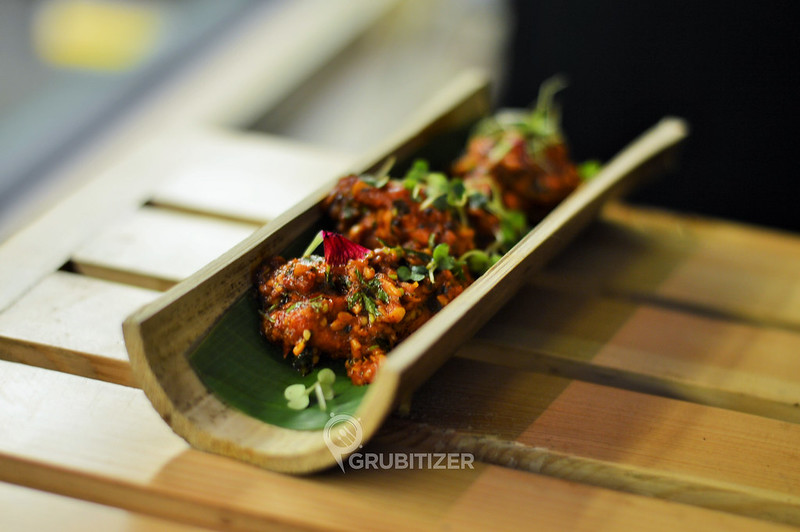 Guntur Chicken is another specialty of South India and the dish is known for its high level of spices. Farzi cafe has managed to replicate the exact taste by using right quantity of spices. This was by the far the most simplest and straight forward dish that I had that evening.

We took a small break as all the food u see above was shared by just the 3 of us (Thanks to our appetite). Our taste buds needed to relax! 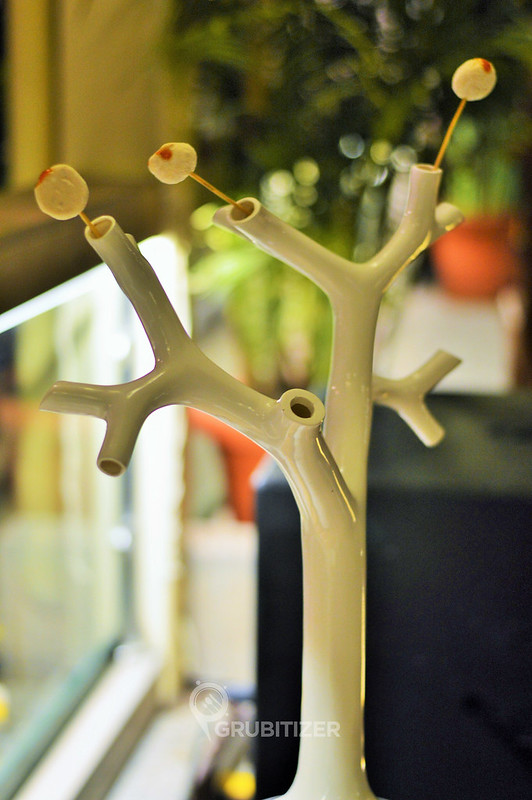 Farzi Cafe helped us by presenting a Palette Cleanser which is Swaad Candy Sorbet, it was quiet tangy and did a good job of neutralizing our taste buds. We were back in action! 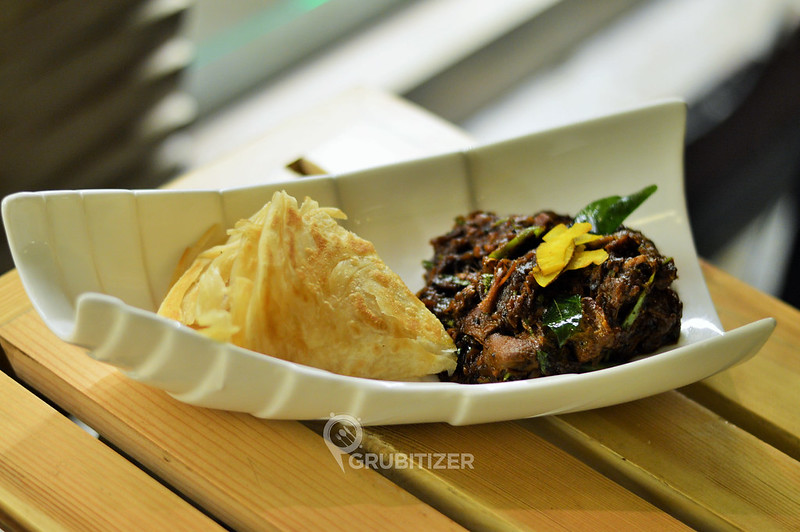 First dish to arrive was this beautifully presented Mutton curry cooked in Malabar style along with Kerala Parotta called Irachi Mutton. The Mutton curry was had hints of pepper in it and Parotta was soft and did not feel rubbery at any point of time. 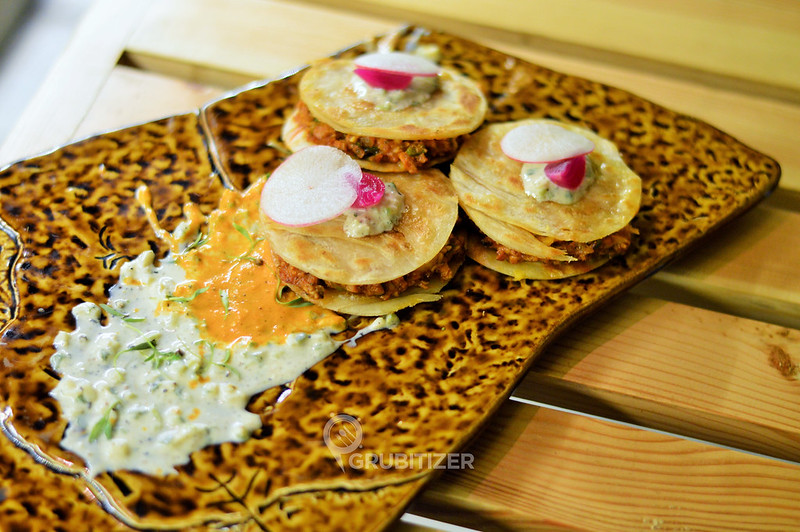 Chicken Changezi Quesadilla is a fusion between Mexican Quesadilla and Mughlai Chicken Changezi. It comes with this delicious Mughlai semi gravy which is creamy and at the same time slightly spicy. The traditional wedges shaped Quesadilla was given way to use round ones which are topped by yogurt and onions. 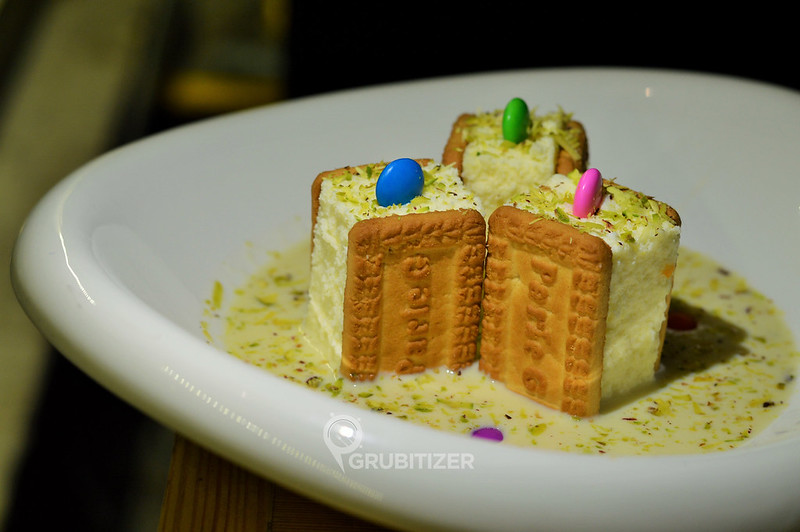 Two signature gourmet preparations we had – Parle G Cheesecake and Rasmalai Tres Leches. Both these desserts score high on innovation as I doubt any other place could have imagined sandwiching a cheesecake with Parle G biscuits and our very own Desi Rasmalai to be fusion-ed with the Spanish dish Tres Leches. The outcome is surely unique and make these desserts a must try! 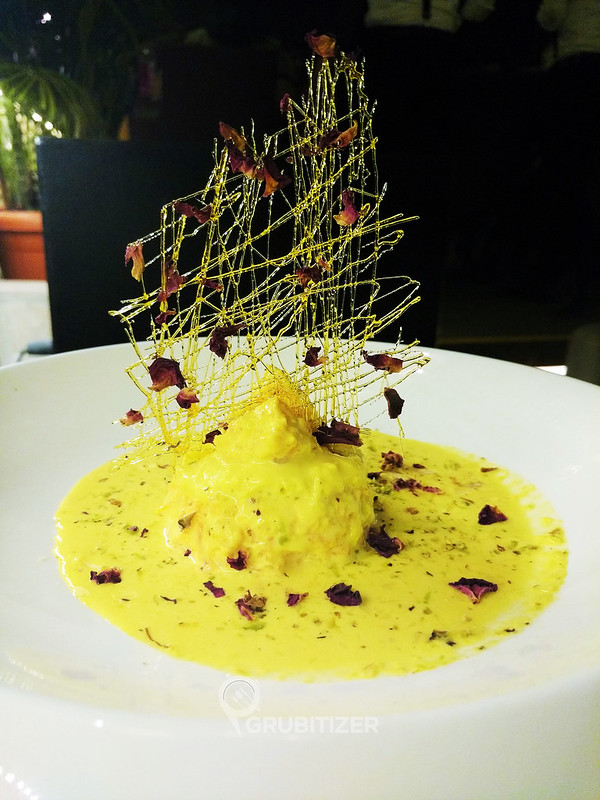 Presentation is spot on and these desserts are clicked umpteen number of time, Well thanks to Gems on the Cheesecake and rose petals on Rasmalai! 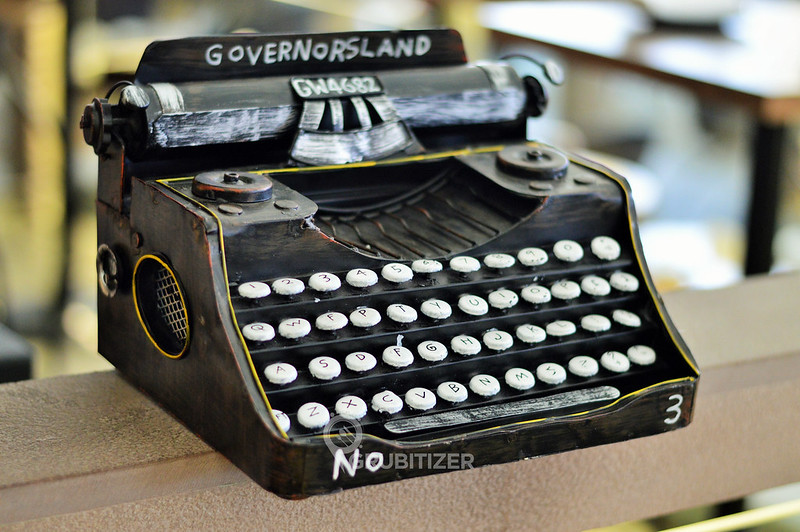 Now since this dinner was on invite we did not have to pay the bill! But we got a gist of how it is going to feel on a normal visit as your bill is presented in a very unique setup- Yes, it comes in a type writer.. Quirky isn’t it 🙂 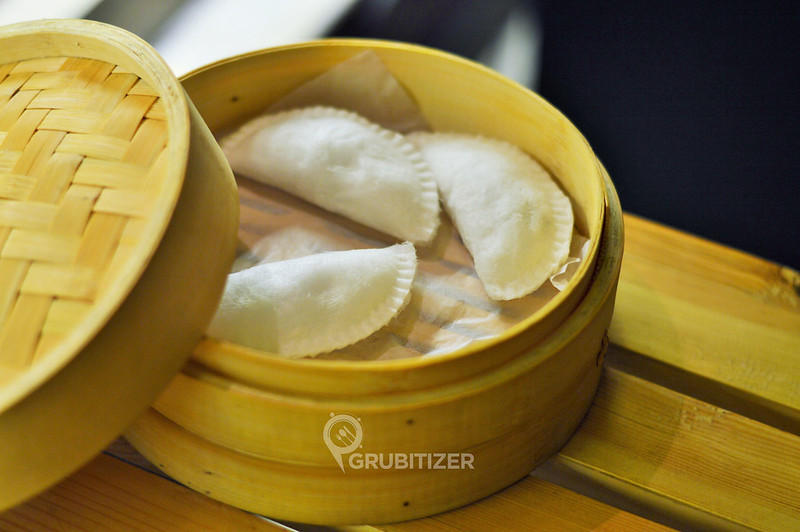 Mouth freshener also holds some surprises as you are given Gujiya (Indian Sweet) shaped cotton candies which are soft and fluffy and impart a lot of Paan flavors.

GRUBITIZER’s TAKE :
Farzi Cafe is one place where even after multiple visits there are less chances of getting bored. The menu offers so many surprises up its sleeves that you would want to come here more often to try out each and every item. Brewery is something which I am looking forward to and am it is going to add even more excitement to Farzi Cafe! The service is impeccable and the staff here can’t be compared to any other place in Bangalore, yes it is a strong statement but I can vouch for it based on my experience. Reservation is a must as there is hardly any scope of walking down unplanned as the place is always crowded, but you can still try your luck on weekdays.