Bangalore has seen a surge of breweries which churn out some of the best craft beers, then we have classic places which serve exotic beers from around the world. But you can get your hands at them post noon, and it seems apt as a lot of people would prefer going out for a drink either in the afternoon or evening. Then we have a good set of crowd who would go a step beyond the conventional ways to start their day with beer, and that’s when Bak Bak Bar takes the center stage. ‘Beer and Breakfast’ is a new concept here which lets you start your day with your favorite drink – Beer! Combine all of this with lip smacking breakfast menu that caters to every palette and you’ve got a perfect way to kick start your day. 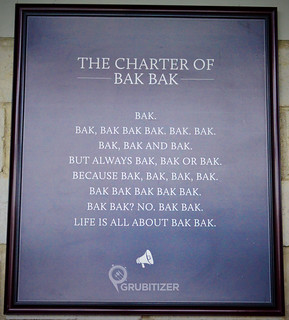 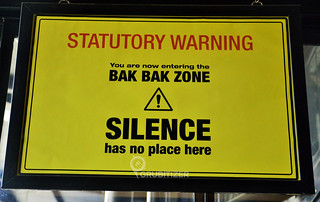 I was here on a Sunday morning accompanied by my blogger friends to preview various dishes from their ‘Beer & Breakfast’ menu which consists of various options priced from ₹99 to 299 which makes it pocket friendly as well. 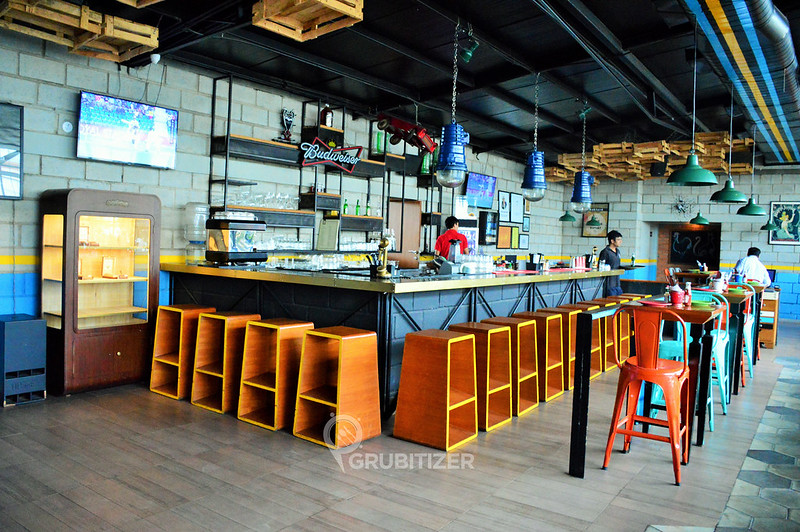 Bak Bak Bar is located at Sony World Signal beside Croma/KFC building. The restaurant is a roof top and has indoor and outdoor seating options and I would actually prefer the indoors as the traffic noise outside gets a bit annoying at peak hours. The decor has lot of elements to keep you amused throughout, there are funny art work and quirky one liners all around which are so much fun to look at! 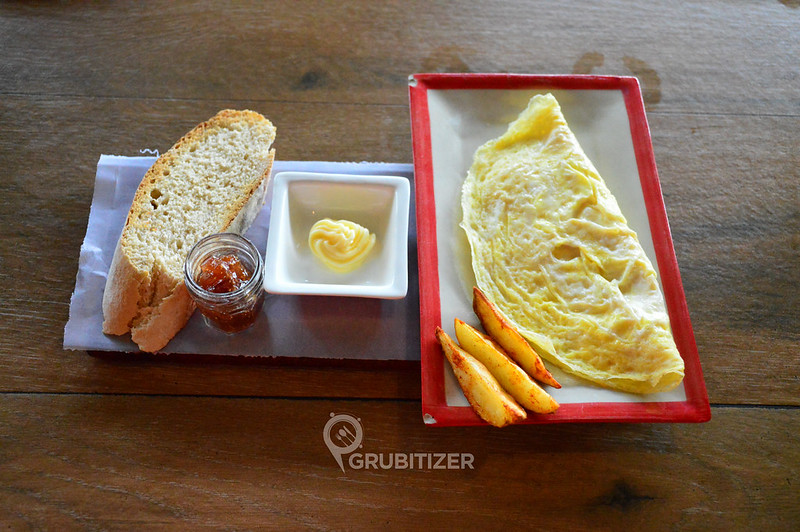 We began with a pint of Kingfisher Premium beer, a refreshing Lager which has intense flavors of citrus and herbs. The beer did go well with most of the items that was served to us! 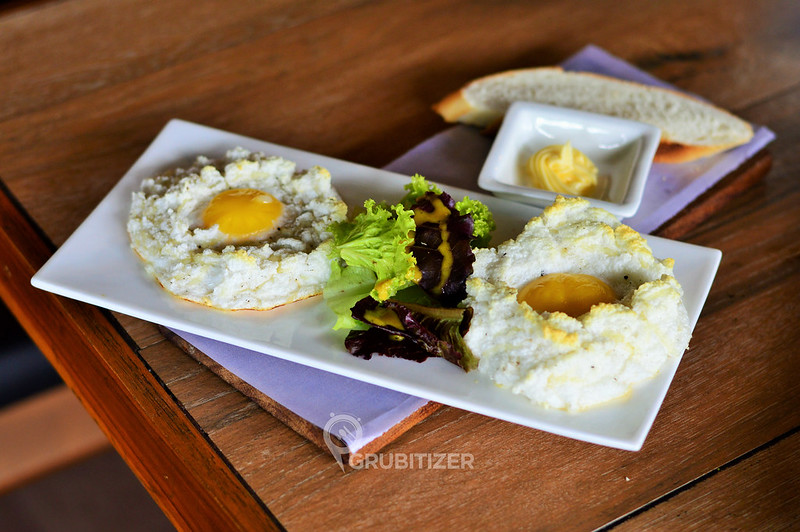 Baked Eggs In a Cloud

Our breakfast started with Just Say Cheese Omelette and Baked eggs in Cloud, Just Say Cheese is a signature dish which is omelette filled with mozzarella, cheddar, feta and cream cheese.. Yes all that cheese inside an egg makes it drool-worthy! 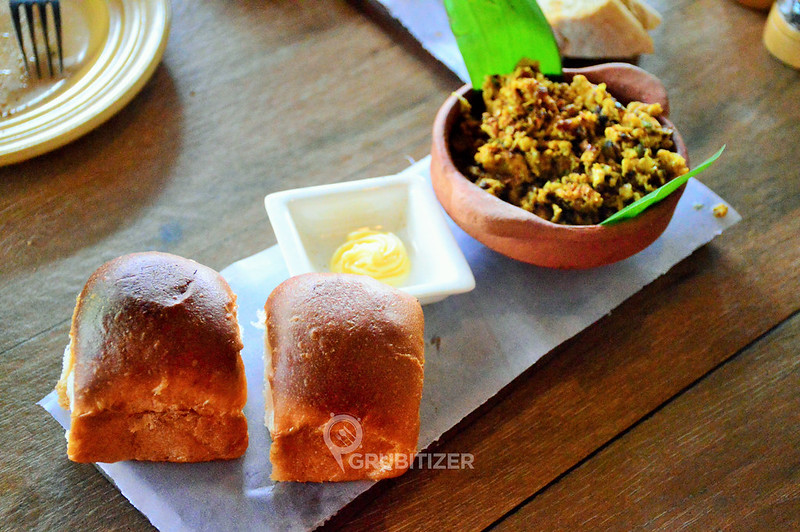 Akuri is another signature recuperation which takes inspiration from Parsi cuisine and served with Pav and a dollop of butter, it is mild spicy scrambled egg garnished with chopped onions and tomatoes. 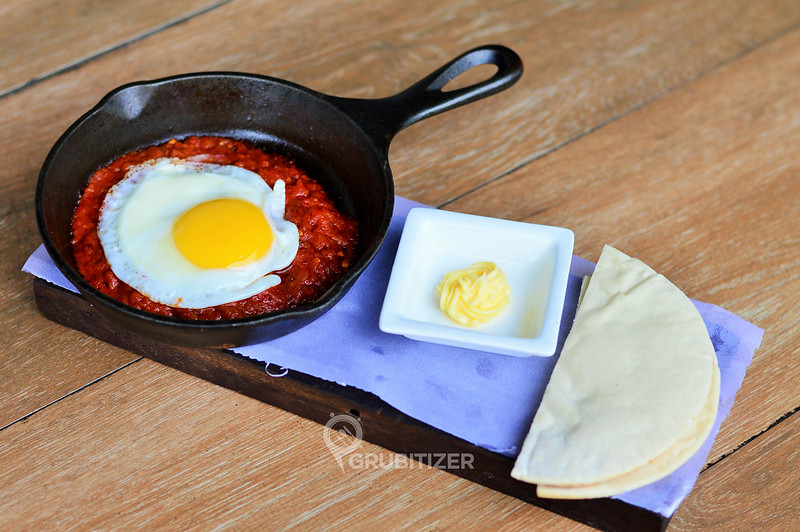 Next we had Shakshuka, a popular Israeli dish which is in simple terms is sunny side up omelette placed on a bed of red sauce made from tomatoes, onions and a lot of spices. This delectable combination of tomato and eggs is served with Pita bread. 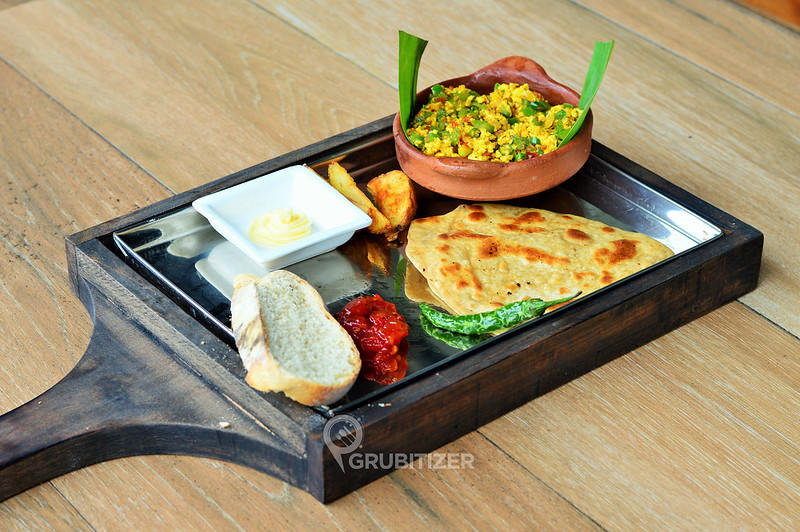 Surat Egg-less Masala Bhurji is a pretty big platter consisting of crumbled Paneer bhurji seasoned with chopped chilies and coriander which is supposed to be had with Plain Paratha. Do try the Ginger and tomato chutney that you get with it 😉 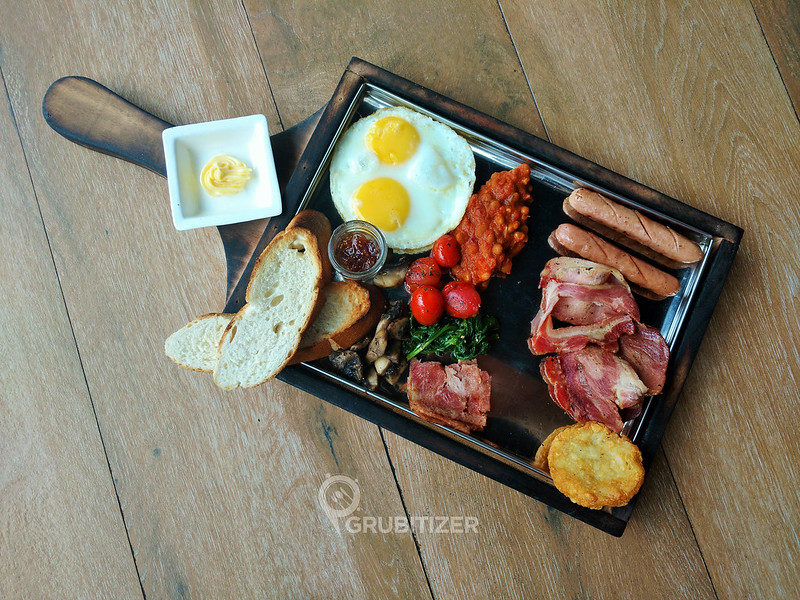 We then got an elaborate platter from their ‘Breakfast fit for a King’ section called ‘A full English breakfast’. It had two smoked pork sausages, bacon, baked beans, hash browns, sauteed veggies along with toast and butter, in short you’re getting a full fledged one meal breakfast! 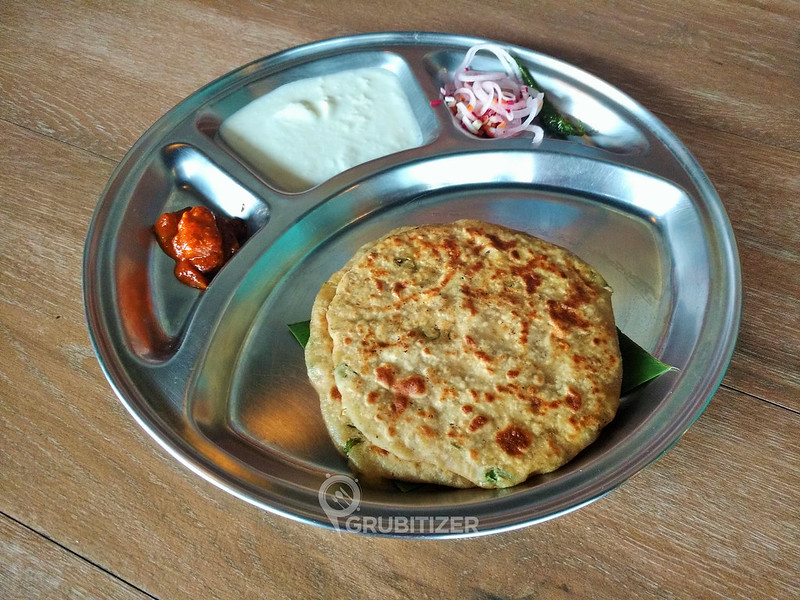 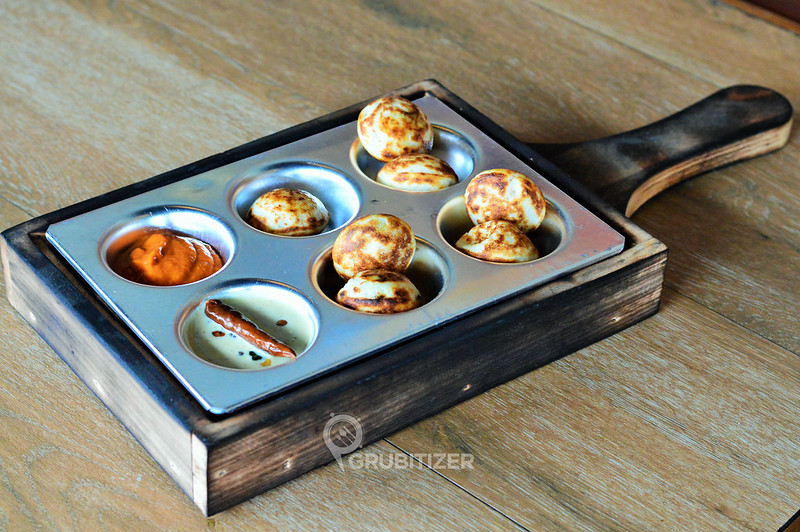 There is an interesting section in this menu called ‘Desi’ which offers native Indian breakfast dishes. We chanced ourselves upon Kuzhi Paniyaram, Aloo Paratha, Idiyappam with Pandi Curry. 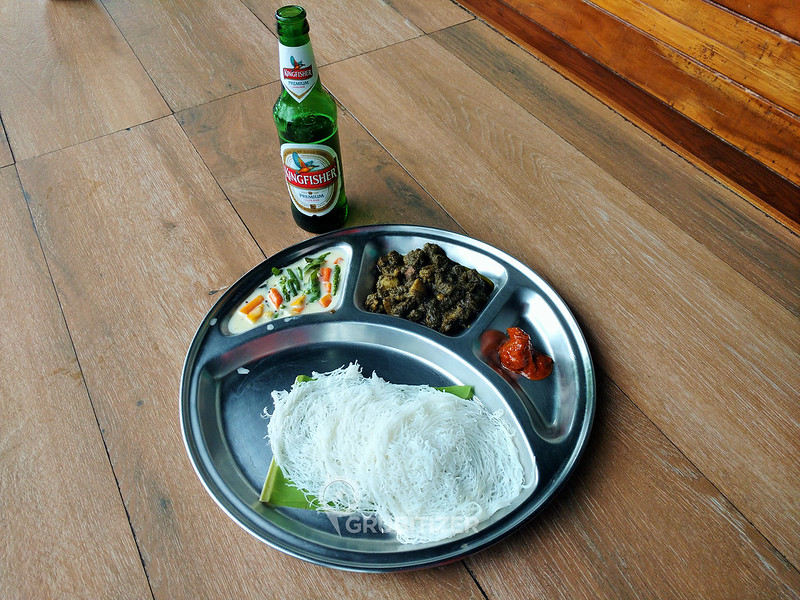 All these were brilliantly done and I personally loved the Idiyappam with Pandi curry, it was the closest thing to the authentic Pandi curry you get. Chutney which came along with Paniyaram hit the sweet spot, it was spiced mildly and had the right texture. 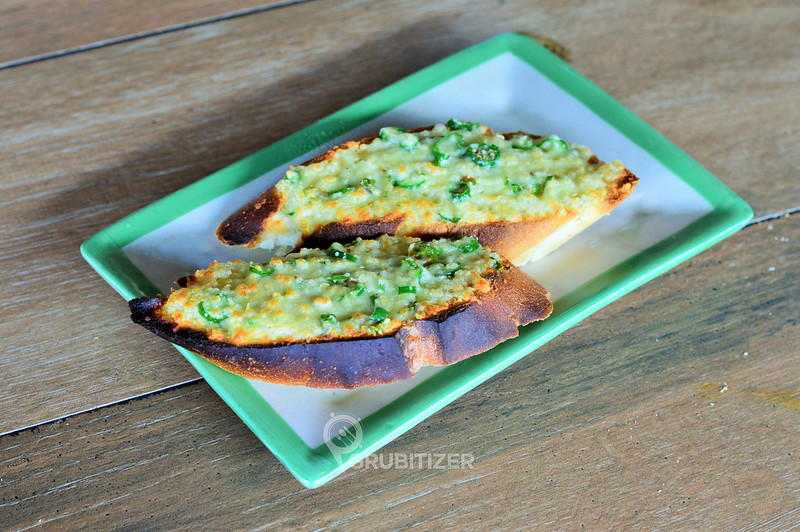 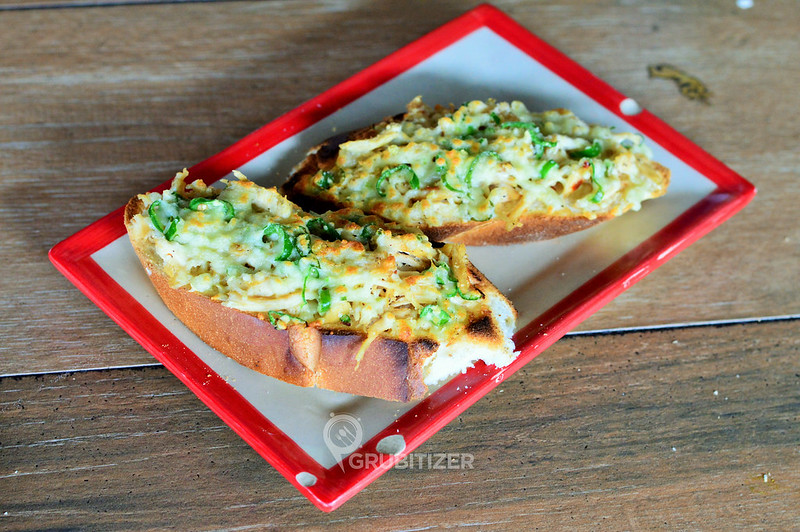 We then tried chilly cheese toast (veg) and chicken n cheese on toast (non veg), they were slightly dry but the toppings did add a good amount of feel good factor to it. 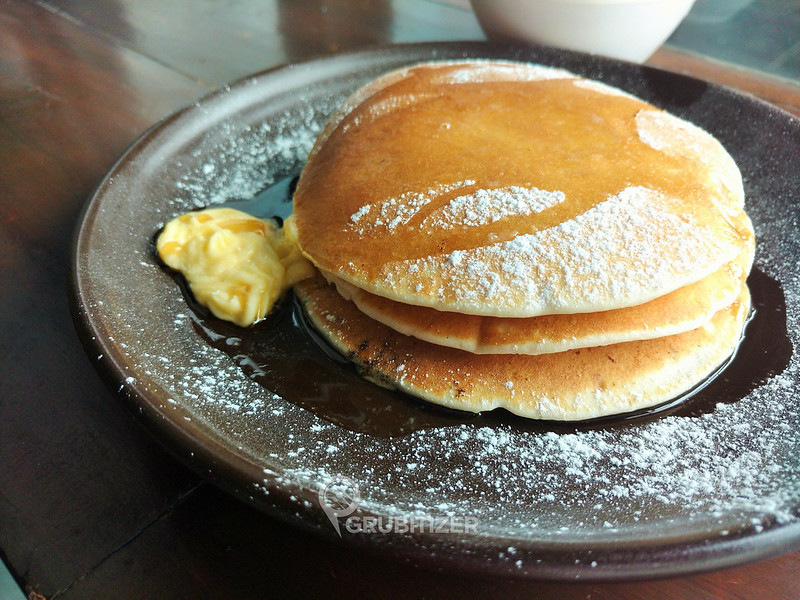 Our meal came to an end with classic pancakes, classic waffles and herb waffles. I felt there is some room for improvement here as the pancakes were lil too thick and the waffles were chewy which made it hard to dig in. 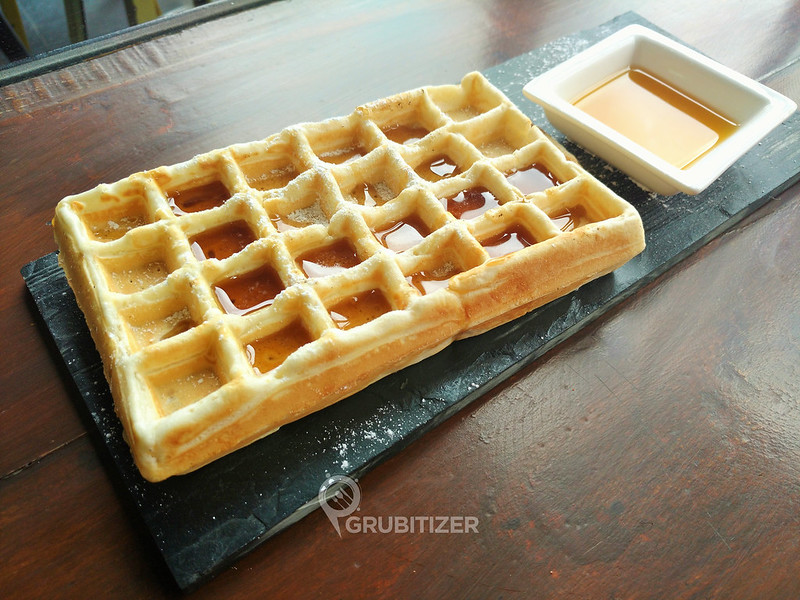 I have been to Bak Bak Bar many times before and always felt service is quick and fairly accurate. This place promises to offer an offbeat breakfast experience which includes quintessential English breakfast to popular Parsi and Lebanese options. The breakfast menu is designed in a way that it goes well with the wide range of bottled beers available here. You can get your hands at these delectable delights from 9 Am to 6 PM!