My Cousin’s place is one humble looking restaurant located in Electronic City Phase – 1 (on Velanki Drive, little before Paradise Biryani) and has a very different concept for a restaurant known for serving cuisines that is influenced from countries across the world. So the folks here follow a zero wastage policy, this translates to the fact that your food is prepared right from scratch after you place the order. It also ensures that the raw materials are carefully picked based on the size of current order. Yes, this also means that your order might served lil later than usual but hey, we gotta respect that nothing is going waste eventually. Second thing is the cyclic/changing menu system- this sort of volatile nature of the menu helps you get variety of options on every visit. An extremely good move to keep the curiosity and interest alive. 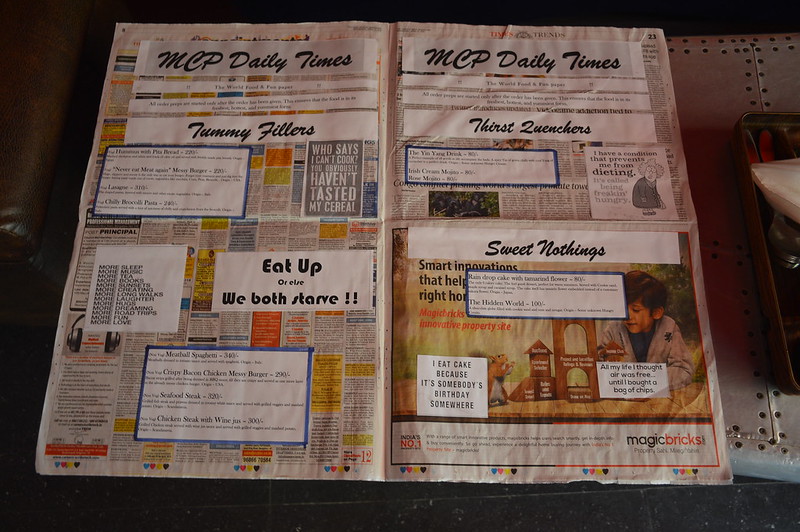 I liked the way their menu is made, it is not the traditional booklet kinda thing we see all around, instead it is made with cutouts stuck on newspaper. The menu has a short description about each and every dish along with its origin, to me it was a simple yet a very informative and appealing way to project all their offerings. 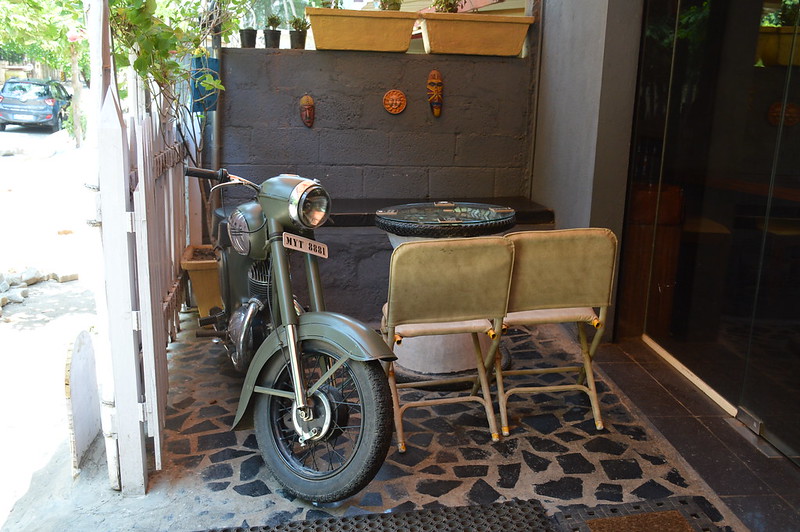 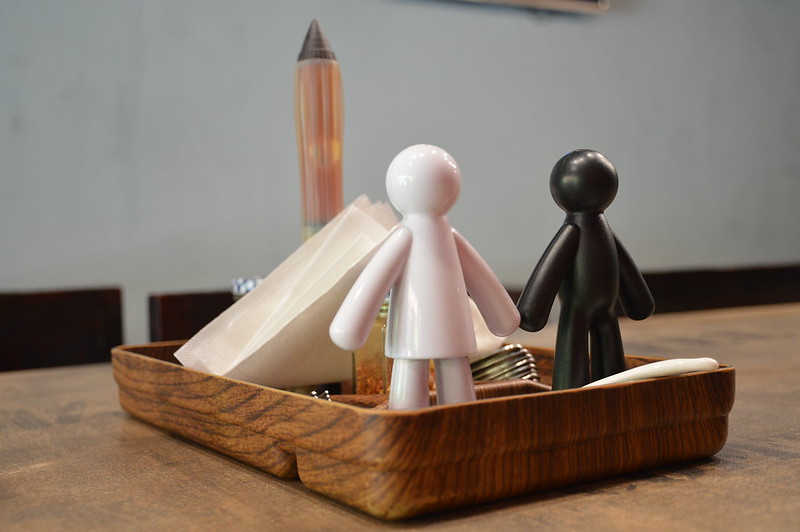 I was here for a bloggers meet which happened a couple of months ago, yes I apologies for the delayed post 😦 This article is going to give you insights on what you can expect from your visit to My Cousin’s Place. Since they have a daily changing menu, some items you see here wont be available when you visit them. 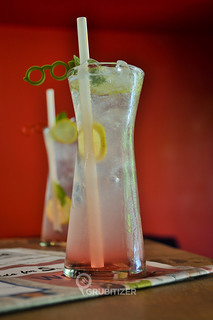 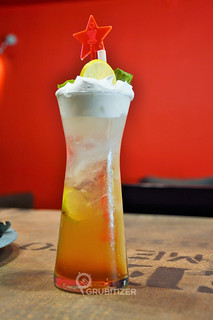 It was a sunny afternoon and the set of mocktails that came by did a wonderful job of rejuvenating us. We had Yin Yan Drink, which easily qualifies to be one of the best drinks (mocktails) I have had till date. It has a spicy initial taste which gets subdued slowly because of cooling extracts of fresh cucumber. Irish Cream Mohito and Rose Mohito were the other ones which served the purpose equally well. 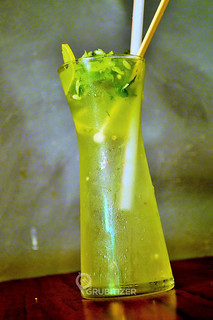 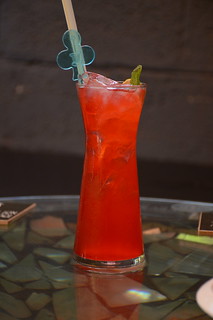 We had Leaky Potato Soup and Cream of Chicken Soup. I had tasting portions of both of them and soon realized that I was looking forward to some really awesome food because the start itself was so good. 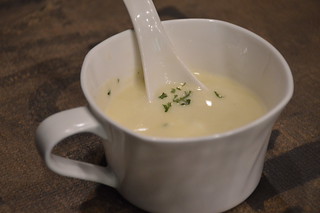 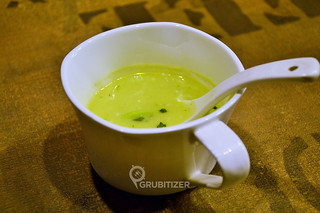 The cream of chicken soup stood out for me, the thick creamy soup made with Chicken stalk pieces when combined with veggies manages to increase your appetite. Leaky Potato soup was a hit among vegetarian folks. 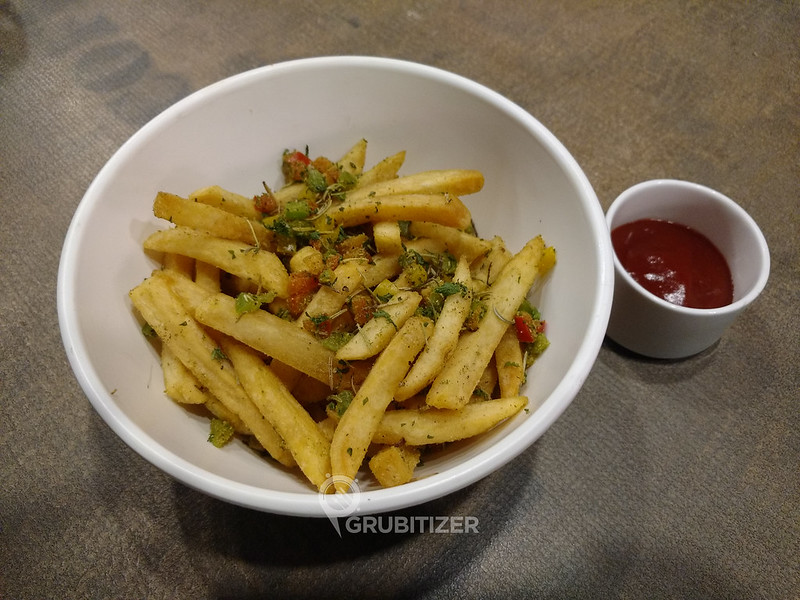 Fries topped with Rosemary and Lemon

Let me start with vegetarian options from this section. Two variants of fries with cheese dip came in where the first one was plain and the second one was topped with Rosemary and lemon, both were perfectly salted and moderately crisp. 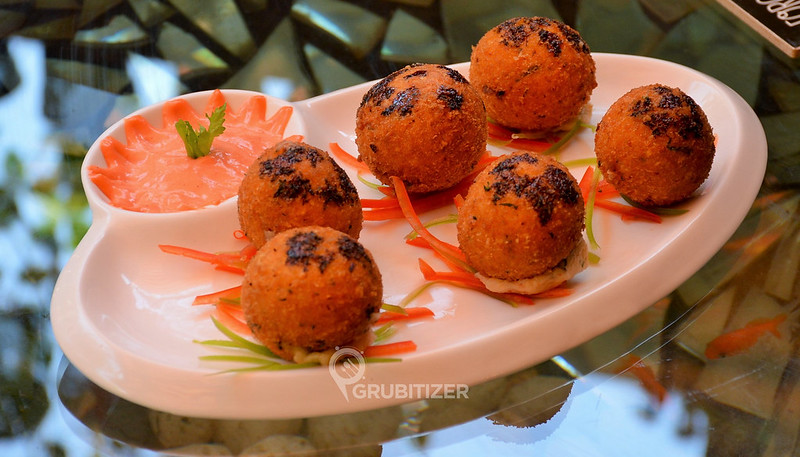 Cheese balls is yet another common preparation that we see around and what we had here was 2 cheeses rolled into balls with potato and deep fried in panko batter, loads of cheese drooled from it on every bite which indicated it was prepared to perfection. 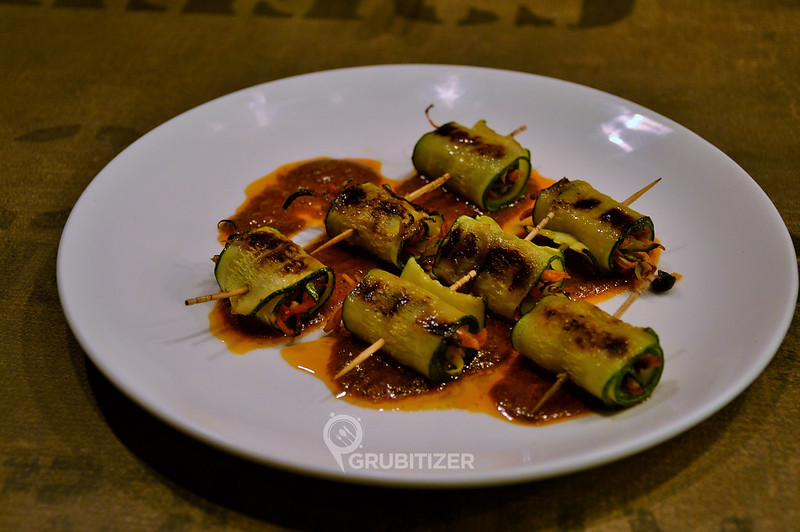 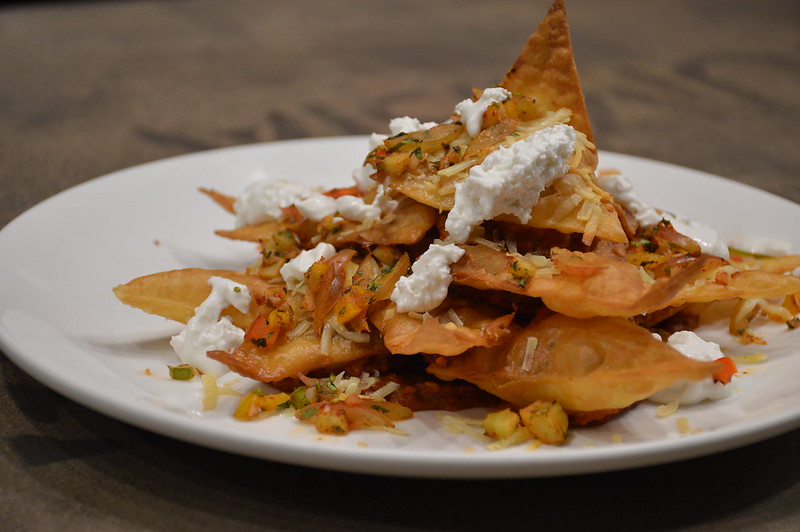 Our next platter was adorned by tiny bite sized rolls lying in a bed of sauce, it was the Zucchini Rolls. Fried Nachos was next, a dish pretty popular in Northern Mexico, the one served here was tortilla chips topped with cheese sauce. The chips had right texture and can turn you into a munching machine, this one is a perfect order for those long gossips! 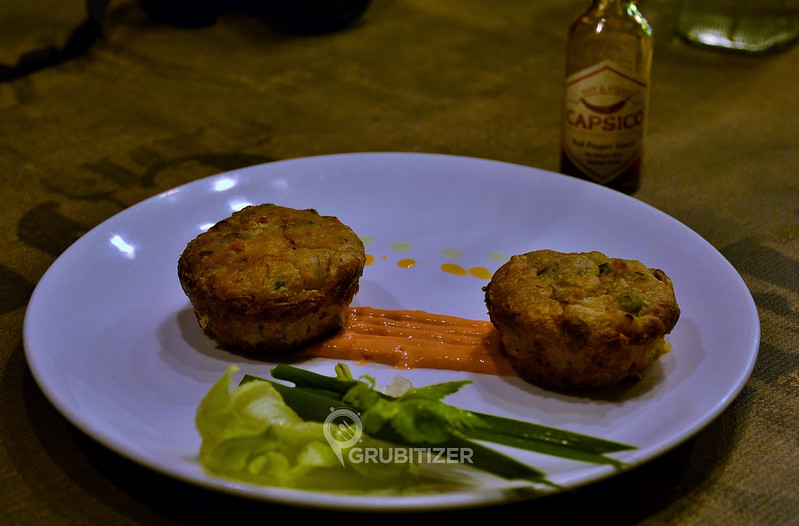 Our focus then moved to the non veg appetizers and the first item to arrive from their menu was Chicken Muffins which is spicy minced chicken wrapped around the bread, it is a life saver for people who love muffins and chicken separately but rarely get a chance to savor them in one package. 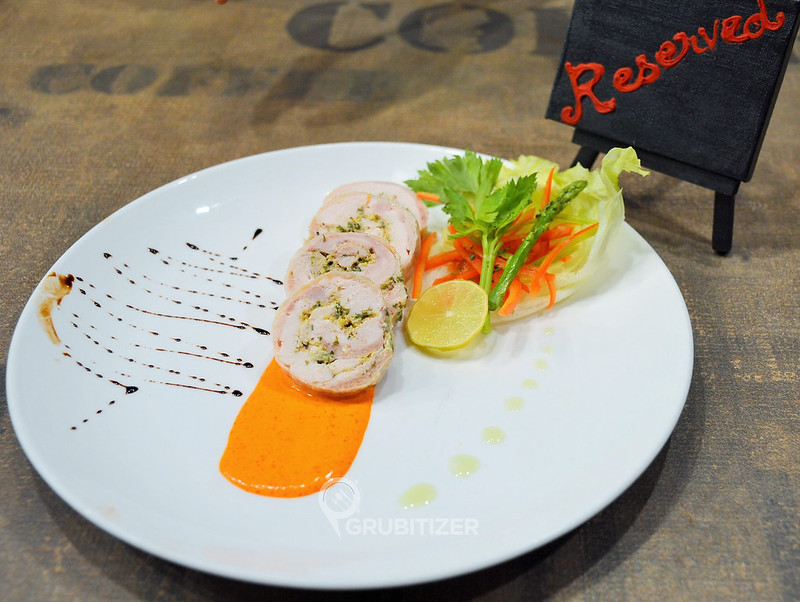 Chicken Roulade is a European dish which is one of the examples from MCP’s cold kitchen, it has various stuffing filled inside chicken which is then oven cooked. Loved the way this dish was presented with a layer of sauce and veggies alongside it. 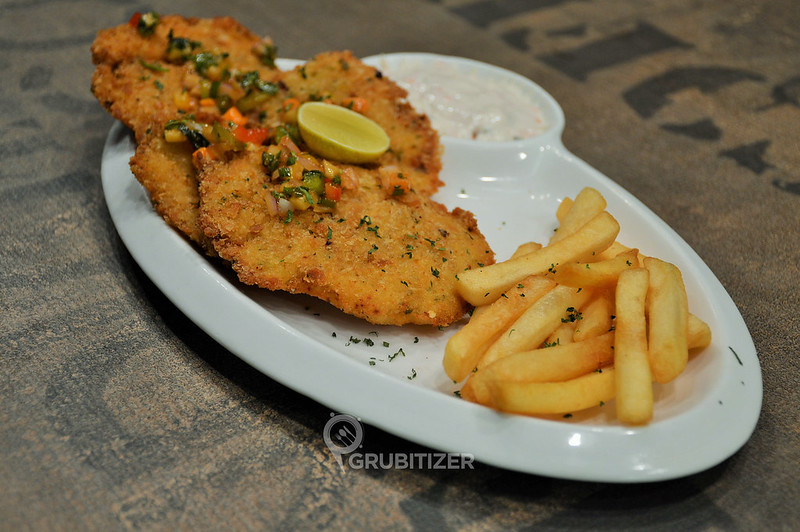 Fish and chips is probably my favorite sea food appetizer for the fact that it is one of the cleanest way to have fish (noob thoughts :P). You get slightly bigger fish fillets which are deep fried and served with cheese/mayo dip. 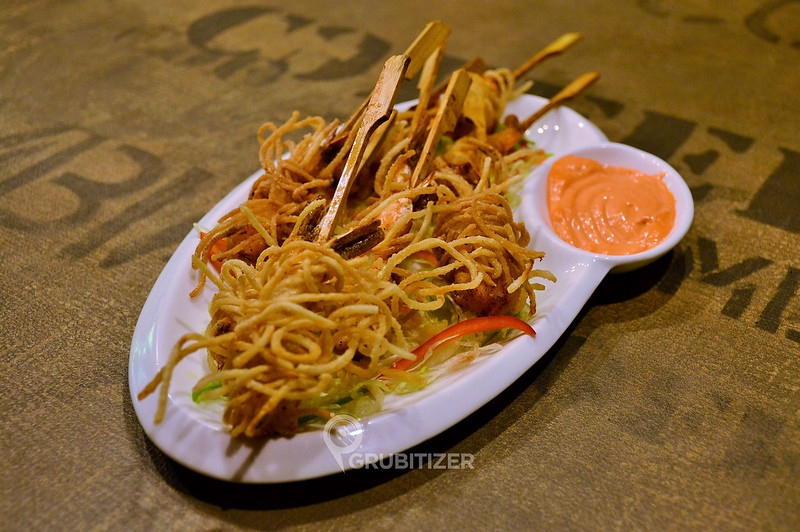 Noodled prawn is something which I came across for the first time and the presentation looked appealing, it is basically prawns which is pressed in noodles and then deep fried to get that very appealing golden brown shade. All you got to do it hold the stick and dip it in the chili mayo sauce take a big bite, make sure to have a plate beneath as it tends to get messy when the noodles break open!
Our elaborate appetizers section came to an end and we were all so full, hence we asked for smaller portions of main course 🙂 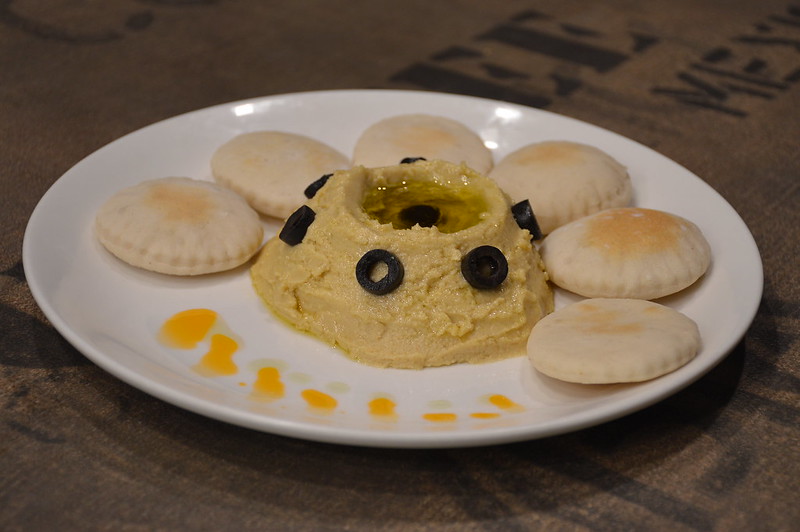 After a small break we then continued with main course where we were served with a wide variety samples. Vegetarians among us savored on Hummus with Pita bread which is mashed chickpea and Tahini served with freshly prepared fluffy Pita breads. Hummus was nicely done, it had that grainy texture which is expected from this pseudo gravy dish. 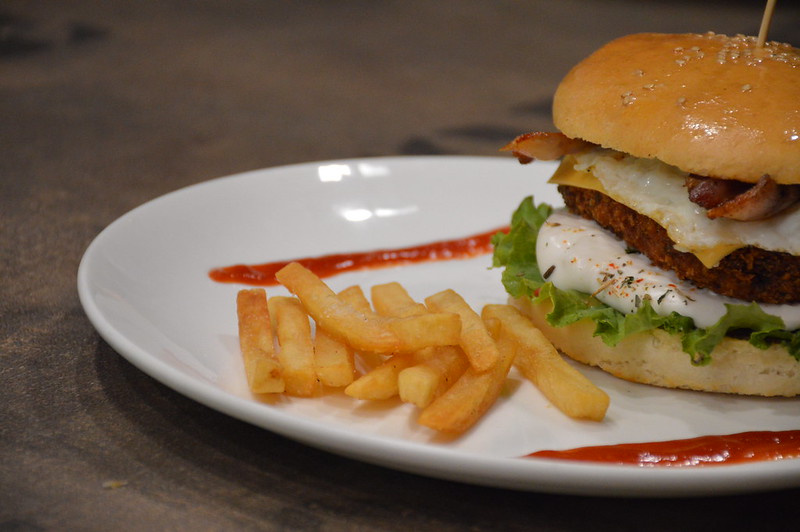 When you are here and spoilt for choices, try out their range of burgers as you can not go wrong with it. We had ‘Never Eat Meat Again’ messy burger which is massive and messy all throughout. Primary ingredients here are an assortment of veggies like Zucchini, corn and broccoli. Many friends complain that veg burgers aren’t that great and they end up looking the same everywhere, but this burger here can bring a smile on their face for sure. 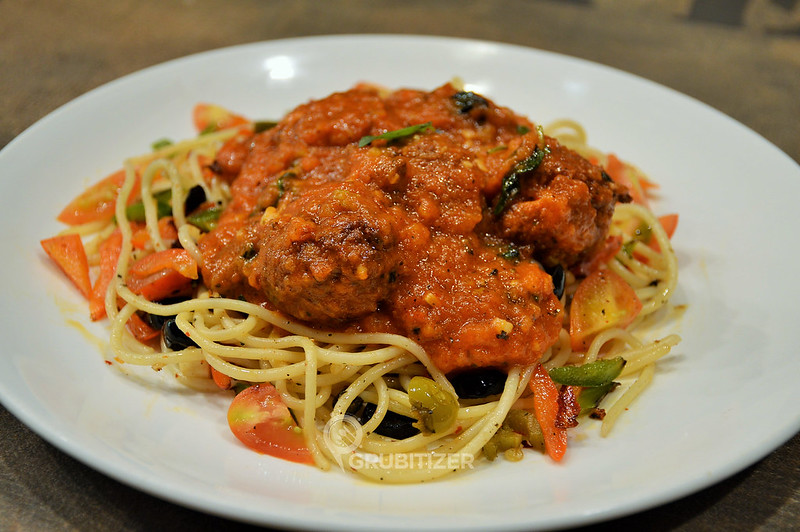 The non veg counterpart of this is the Crispy Bacon Chicken Messy Burger, the sizable bun encloses bacon strips which are grilled and dressed in BBQ Sauce along with a layer chicken. 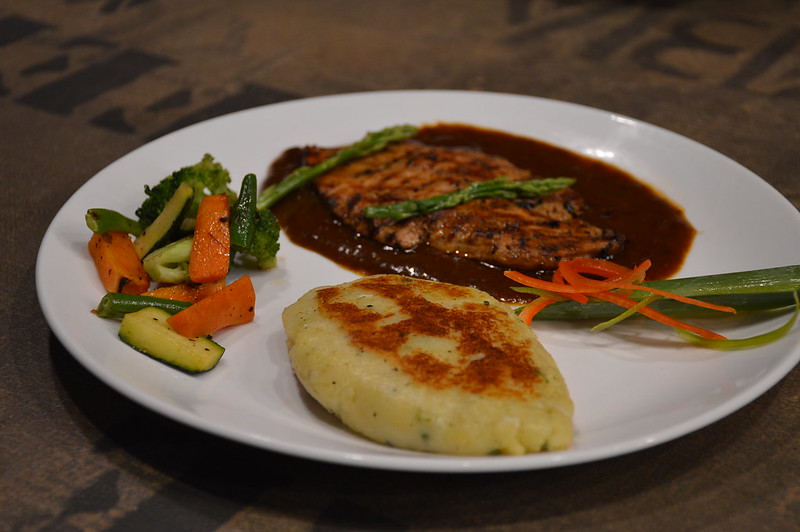 Other main course dishes which came by in quick successions were Meatball Spaghetti and Chicken Steak with Wine Jus, where the latter looked more appealing as it had grilled chicken steak along with grilled veggies and mashed potatoes and served with wine extracts. 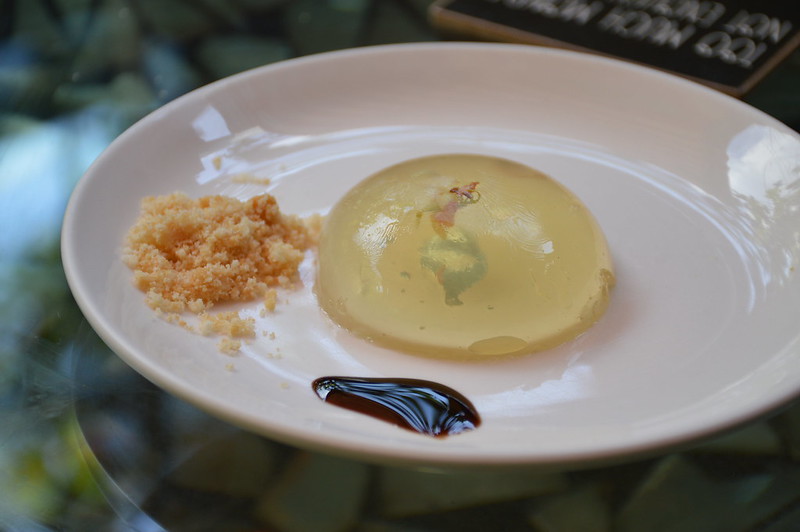 Raindrop Cake with tamarind flower was easily the best way to end our lovely meet which was already filled with so many exotic preparations. This feel good dessert is a perfect companion for warm summers. It is told to be a 0 calorie cake which makes it even more tempting (who doesn’t like a guilt free trip!). It comes with cookie crumbs, maple syrup and caramel syrup.

All in all, this place has so much more to offer than just the items which are listed on their menu. No doubt the food served deserves a massive thumbs up, but along with it you get great hospitality and care which reminds me of my childhood days where I used to feel the same after visiting my cousin’s place!! One visit here and you easily recognize that the folks running the show here are extremely passionate about food and you as a customer end up getting the perks. Wish the place was a lil more closer as the current location is lil far from where I am put up 😦 Yes, I envy the people who stay in the vicinity of My Cousin’s Place 😀

Click on the widget below to navigate to their Zomato homepage: